This week's update brought to you by Brian, whose mighty bait 'n tackle could dig the Euphrates River Valley as Enkidu's once did, or as Reggie Nelson's certainly could if it weren't already busy slapping bitches dead in the NFL. The home stretch means sirens, people. Two of 'em, actually.

South Carolina, What! South Carolina Gamecocks defensive end Clifton Geathers went to Club Ice early Sunday Morning. Why? Because Club Ice is on Lady Street, and that's where ladies are. (That is a real photo from Club Ice, btw, and a reminder that though you may look drunk in a photo, you will look eight hundred times more drunk with redeye.)

Then Clifton Geathers got hero-drunk and did what heroes do when they're drunk: he looked for a dragon to slay, or failing that, a security detail to scuffle with as a 6'8", 281 pound man. EPIC MUGSHOT WIN after the jump: 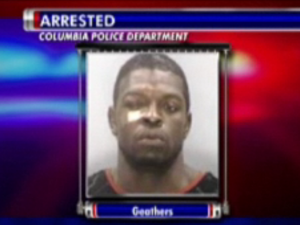 Geathers got into a fight with a security guard at Club Ice, or tried to make love to a windmill. The defense will use the latter, but the former is what got the cops there and got Geathers charged with resisting arrest, disorderly conduct and public drunkenness, all misdemeanors worth one point each. Tag on the requisite mugshot goodness bonus point, and South Carolina is awarded four points in the Fulmer Cup, thus making the only big move of significance on the Big Board this week. Teammate Jarvis Giles was involved in some kind of domestic disturbance on campus with a woman, but with no charges filed yet, we refrain, and simply state that the beginning of football season means couples sparring over time and attention, and sometimes that literally means "sparring couples."

It should be mentioned that Geathers checked into jail at 5:45 a.m., and was checked out in the ten o'clock hour, and that little could feel worse than checking out of jail drunk, tired, and utterly pummeled at 10:30 on Sunday morning.

Sparring Couples, One: Alabama linebacker Courtney Upshaw was arrested for domestic violence/harassment, but so was his girlfriend, Kendall Gryzb, who was enraged at Upshaw for hoarding all those vowels in his first name while she needed them so desperately. The police report describes Gryzb getting slappy after seeing Upshaw talking to another woman, and Upshaw showing linebacker pursuit skills by following and then grabbing Gryzb by the neck from behind before pushing her down.

Dad's not concerned, though.

After speaking with his daughter upon her release, Kendall's father Dave Grzyb told the Press-Register that it was a "simple lovers' quarrel altercation," and that "I honestly think it was probably initiated by my daughter. I don't think he laid a hand on her. He just tried to restraint her to keep from getting hit again."

We can't decide whether this is negligent parenting on public parade, or a tacit public acknowledgment of a daughter's insanity when it comes to dating. Cue Auburn conspiracy theories about him being bought off, and award one point to Alabama for the misdemeanor charge.

Sparring Couples, Two. Kansas State has a remarkably similar situation with Joseph Kassavanoid and his girlfriend, who were both charged in a domestic incident. One point for K-State and their backup quarterback whose last name sounds like a pharmaceutical compound.

I WILL KILL YOU WITH MY VOICE. Auburn running back Eric Smith has an appointment with the police today on a third-degree assault charge, which he's cooperating with fully, since he seems like he's owning up to beating a drunken student up with his hands AND HIS MIGHTY VOCAL CORDS.

The victim did not know his attacker, according to a victim report obtained by The Opelika-Auburn News.

According to the report, the victim was assaulted in the third degree by "hands, fists, voice, etc."

Etc is so tempting to the imagination: "Smith then beat up his victim with a taxidermed kangaroo, the abstract concept of sorrow, and the fender from a 1989 Fiero." The misdemeanor charge gets Auburn one point in the Fulmer Cup, and breaks the streak noted in the article of Auburn players staying out of trouble, since Auburn's last arrest was in 2007 for a minor traffic foible.

Belated charges: Vandy gets four points for the Cabbagestalk Burglaries, which sounds like the title of a discarded Jeffrey Eugenides short story, and reminds you that giants, while huge and powerful, can be caught by police if properly chased. (Justin Cabbagestalk is totally a giant's name, and in a children's book would have been breaking into the house to get something shiny and pretty for his tiny but devoted human-sized girlfriend.)