We rate the top 25 estimates by national security. Nerd up, geek out, and follow along for number 20, North Carolina. 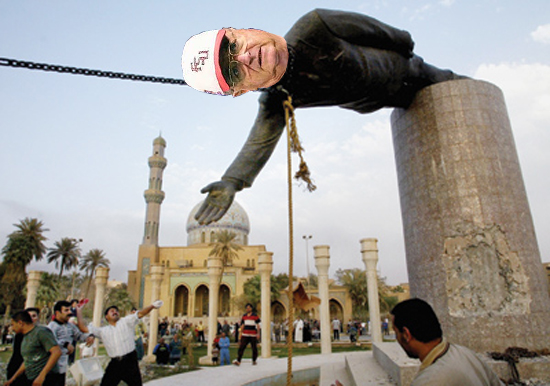 Ah, we kid. Iraq was never big boss like Florida State was for two decades, winning two national titles, 12 conference titles, and showing that even the mightiest of football machines can sputter to a halt if the kicker decides to throw a spanner in the works. Parts of the Florida State campus are perpetually on fire, true, but let's not diminish the significant accomplishments of Seminole football or the job Bobby Bowden did in building it from scratch. That's Bowden's job, and since 2001 he's done a better job of that than anyone.

The more comparable quantity in fact and tone is Egypt: dependent now on erecting statues of its rulers, watching its grand plans for domination crumble, and muddling along as an influential but by no means hegemonic power in its region. (Look, kids, the pyramids; look, kids, the 1999 National Title trophy.)

Both are ruled by a old men born in the late 1920s whose power peaked over a decade ago, and who pulled strings to put their sons in positions of power with unpleasant outcomes. In turn, both Mubarak and Bowden oversee disgruntled populaces not quite emboldened enough to call for their ouster, are rather short, and do not understand what you are saying, son. (They really are just a year apart in age.)

Egypt and Florida State have had their asses handed to them in battle by much smaller powers in recent history, and despite all the complaints about the management in all areas, little seems set to change until time and the limits of the human body push one leader or another out of power. Until then, there's statues, the plum seat in the Arab League meetings, and the Music City Bowl to make the passing of less glorious present days slightly less painful than it might be.

Internal Stability: Good, until it's not: regime change is moving at the pace of plate tectonics at Florida State, first with the departure of despised, ineffective offensive coordinator Jeff Bowden in 2006, and now with the rumored retirement of Mickey Andrews, the legendary defensive coordinator responsible for the long line of FSU defenses delivering more torn ACLs and concussions than a prize rodeo bull with an equilibrium problem.

While the city-state of Tallahassee waits for the Pharoah to entomb the living FSU football program along with him in his indefinite, Favre-ish march to retirement, the product on the field has suffered dramatically. FSU hasn't made an ACC title game since 2005 (the first year of the "enhanced for your pleasure" ACC,) and has struggled to play consistent offensive football despite adding Jimbo Fisher and Rick Trickett to the staff and continuing its streak of outstanding recruiting classes yielding little to nothing in terms of NFL draft picks. Talent goes in the hole and doesn't come out in Tallahassee, something that did NOT used to be the case.

Historical trends established, this year's edition promises more inconsistency. Upswing: offensive line is now shaved down to Rick Trickett's specs, and will be a strength of an offense returning eight starters, including Christian Ponder, who should have the job all to himself again in hope of experience turning him into less of a scramble-first, think-last qb, and a slightly more polished passer. The hope is not to turn him into a pocket passer, and Jimbo Fisher seems totally comfortable with having him run straight rushing plays in addition to rolling him out constantly (Jimbo likes him some rollouts, son.) The offense loses smashy back Antone Smith, but returns Jermaine Thomas in his place, a speedy, dodgy, dashing back who averaged 7.0 yards a carry last year. Like this, actually:

The defense brings less back, losing its top three tacklers from 2008 and its Rhodes Scholar, Myron Rolle YES THAT'S RIGHT MYRON ROLLE, RHODES SCHOLAR. Don't ever say we won't be charitable and get All Caps excited for Florida State every now and then, undying rivalry hatred aside. They're deep in terms of prospective talent, sure, but this is a defense that got weaker against the run as the season went on last year, allowing over 100 yards rushing in five of their six games last year. Consistency was not their strong part, and expecting a more even performance from a defense breaking in new starters would go against common sense, math, and all those other things we abhor. So, sure. They'll be better!

The IMF says: Optimistic at 19, and prone to instability and high variance. FSU could start their first four games 4-0 or 1-3 without any real uncomfortable stretching of the imagination, especially with the freaky long trip to BYU built in there. The rest of the schedule is pure dogfight, with the final four--Clemson, Wake, Maryland, and Florida--looking like a likely 1-3 stretch based on recent history. Points for bravery are awarded all around, especially as our own dear team gears up for an out of conference stretch featuring FIU, Charleston Southern, and Bill Tavert's School for the Nimble One-Legged Adolescent Child. The only real challenge out of conference challenge for Florida comes at home against...right, Florida State, who could be beat black and blue by the time they wander chin-first into a rivalry game they've been blown out in two years running. The IMF says downgrade to low 20s at best, and be prepared to send emergency aid if the schedule begins to cave in sideways on them and a disaster is declared.