For a time in our misspent youth, we wanted to work in national security. Don't laugh: worse people have done the job at very high levels, with even the admittedly insane thriving in positions of great import. For a time, nothing was more fun for a compulsive list-maker than constructing lists of "States Most Likely to Fail," something we did for a large non-profit relief agency specializing in these things. Unfortunately, this proved to be totally useless, since we were for the most part writing reports for people who already knew what was happening in the field, but couldn't get through to management.

Us: "Yes, the current food shortage in Somalia does hint at some serious instability outside of Puntland."

Field office: "Thanks. We'll use this report to paper the walls of our bombed-out office."

Thus leading us to the only logical way to rank the relative values of the USA Today Coaches Poll preseason top 25, an exercise we've become increasingly opposed to as time wears on. (See: extensive arguments about the inflexibility of rankings, the need to rank teams after week three or so, etc.) Each team will therefore be ranked in terms of stability, and correlated to the country of their choice. 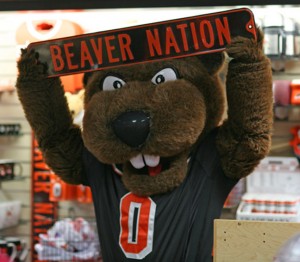 25. Oregon State. Taiwan. The Asian Tiger of the Pac-10, Oregon State is always a nice bid for a 25 spot, especially because most voters not named Steve Spurrier are completely out of ideas by the time they get to 25. Like the Tropical New Jersey of the South China Sea, Oregon State makes diamonds from the coal surrounding them, somehow remaining competitive and managing power transitions well. (The Riley-Erickson-Riley switch progressed without the usual "Dennis Erickson Implosion," a move of underplayed skill on OSU's part.) They run the daylights out of the ball, win eight or nine games a year with frequency, and generally manage their limited resources well. A solid 25 pick by any standards, especially with a healthy Jacquizz Rodgers.

Surprising thing you did not know about the team and the country: Both thrive despite the constant threat of nuclear destruction: Taiwan by China, and Oregon State by the periodic rumors of Mike Riley being hired away from Corvallis.

Also, the Beavers lose eight starters on defense, but that defense allowed 694 yards to Oregon in the final game of the season, so yeah: losing 72.7272% of nothing means you've lost nothing, even if this was the same defense that baffled USC into last year's upset.

The IMF says: Credit rating is strong, leadership in place, and policies seem sound. Approve loans to conservative limits, and authorize futures no higher than #18, the highest ranking the Beavers have ever finished with under Riley. 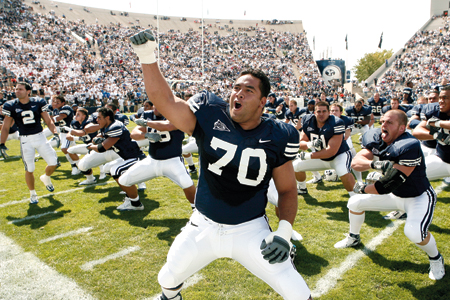 Ah, the celebratory gay dancing of the Mormon Haka! And by gay, well, we obviously just mean "festive"

Companion country: Iran. Forever rumored to be lying in the weeds and ready to explode, but in reality behind their peers in terms of real threat. The question for BYU is, like their Mountain West compatriots Utah and TCU, will they finally rise up and, in an ever-so-polite Mormon kind of way, bite competition on the ass in a serious, toothsome manner? Beating Washington last year can't possibly count towards this goal, especially since officials denied Washington overtime on the worst technicality ever. (Call it the aborted weapons inspection of unsportsmanlike calls.) Also run by religious fundamentalists in search of greater weaponry, i.e. nukes for Iran, and black players for BYU who won't date their daughters.

Internal Stability: Strong, even if Bronco Mendenhall uses a fake name, and cannot possibly really seriously named "Bronco." Regime continuity is strong: Lavell Edwards was at BYU for 83 years, and Mendenhall looks poised for a Methuselan run after the unfortunate Gary Crowton interregnum.

Surprising thing you did not know about this team: Like Iran, their graduates thrive largely on single commodity economy. Iran runs almost entirely on oil and natural gas, while Utah's economy is mostly dependent on Wilford Brimley and the industry of diabeetus testing supplies dependent on his constant, grizzled endorsement.

The IMF says: Rock-steady internals look good, especially with Utah rebuilding a bit, a move with serious upside for regional dominance prospects for the Cougars. 24 for the year is a guess based solely on past performance and the few dull spots in the twenties reserved for Mountain West teams by pollsters. As Utah proved last year, this is both unfair and inaccurate, and makes picking BYU here the equivalent of lowballing a potential high-teens pick. #24 is conservative, especially if you have comparable teams Utah and TCU floating six or seven spots above them--which exactly what the preseason USA Today Coaches' Poll has.

Could be better than this by three spots or potentially more, especially if the offensive line bones up for the big games against TCU and Utah. Poor Max Hall ended up ripped by wolves in both games, taking 6 sacks in the TCU game and throwing 5 picks against Utah. With this provision, approve futures to #18, and possibly higher if they take alpha dog status in the Mountain West as they did in 2007 over TCU and Utah. (This assumes Hall survives whatever horrors await him at the hands of the Sooner defense.)