Before we went on our annual vacation to the Barbary Coast last week, we wrote Charles Bloom, media-tussler for the SEC, and asked what the policies covering digital media. Answer: "A policy document is in the works and is not finalized yet."

That policy document is out, and thunks into a PDF reader with the heft of a Gravity's Rainbow with even less sense. Rocky Top Talk has the fully legalistic spread on the policy, but the relevant bits you need to know most: 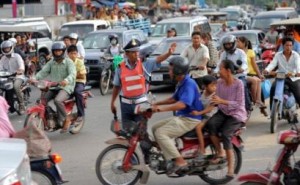 You go there, and HEY! IS ANYONE LISTENING? I SAID STOP!!!

It's all theirs. All of it. The policy document announces the kind of godlike powers the NFL claims over all content, language not dissimilar to anything you'd find in any other league's

Video expiry date: 72 hours. You've got to wait 72 hours before using any video, which under their particular interpretation of fair use is kept to less than three minutes. Or, if that's too long for you, you can just go ahead and pirate it, post it on Youtube, and keep the websurfers in Birmingham busy.

In the interest of expanding the SEC payroll and stimulating the Birmingham economy, I encourage you to do exactly this. At any rate, it will at least encourage tighter editing for maximum effect, and the use of shorter songs. The only ones heartbroken by this: those who like to set highlight reels to prog-rock or Mastodon.

The SEC, like everyone else, points at Twitter and screams MONSTER. The policy fundamentally misunderstands the purpose of Twitter, but they're not alone, since no one understands precisely what Twitter is going to be, what it does, or why it's so extremely addictive. The policy curiously forbids credentialed media from providing commentary on the game via any kind of digital medium, meaning you can actually provide more thorough sanctioned commentary...

"... the determination of whether a blog is a real-time description or transmission shall be made by the SEC in its sole discretion."

We understand this provision. After all, we know the steampunk-loving hip kids these days long for the days when they could turn off the game, ignore the troublesome images and sound, and just get the delayed events of the game relayed in easy text form. This is verbiage puked out by a lawyer attempting to cover the entire sphere of possibility under their reign, and is jibberish. You tweet or blog or post not to supplant the game, but to accent and supplement the game. This rule will be broken seconds into the first broadcast, rebroken throughout the season, and broken in the manner that any rule seeking to govern micro-content: rapidly, giddily, and with impunity.

Fans are forbidden to do this, as well, but the the first security guard who attempts to wrest an iPhone from the hand of an intoxicated LSU fan gets the David/Shaun of the Dead treatment. This would not and will not end well. Young security guards of the world: $13.50/hr on Saturdays is not worth being torn apart and feasted upon by an angry mob. Let them tweet, and policy be damned.

The Final Outrage: Oh, this is such bullshit:

"Bearer may not bring alcoholic beverages, bottles, cans or containers, laser pointers, irritants (e.g. artificial noisemakers), video cameras, strobe-lights, or any type of weapon (or anything which the SEC or its member institution may deem a weapon) onto the premises of the Event.

OUR STROBE LIGHT AND BATTLE AXE ARE OUR MUSES. Without them, the world is grey, sad, and lifeless. Don't even ask us what they're going to do about the Derringer Paul Finebaum wears in a garter belt on his right thigh. He's had that thing for years, and you'll have wrestle it away from his cold, dead hands.