THE HAL MUMME COACHING TREE: MORE OF A SHRUB, REALLY

Share All sharing options for: THE HAL MUMME COACHING TREE: MORE OF A SHRUB, REALLY

If you're an SEC fan of a certain vintage, you probably have vivid memories of former Kentucky head coach Hal Mumme: looked like Ted Danson's awkward younger brother, called plays like a desperate bizarro-world Steve Spurrier, and was characterized by the near-constant presence of a jaunty neck towel that had to have been perpetually sodden with the floppiest of flop sweats. His four-year tenure at UK read like the Cliffs Notes version of a Scorsese mafia epic -- lifted the Wildcats up out of decades-long obscurity to only their third back-to-back bowl appearances in program history, but painted this veneer of success on a rickety structure of malfeasance and staff infighting, and flamed out in the third act as player payments were exposed and the 'Cats were pile-driven into 2-9 embarrassment. Mumme is now the head coach at Division III McMurry University, which currently does not have a name or mascot for any of its athletic teams as a result of the NCAA striking down its former nickname, the Indians, on the basis that it could be seen as offensive to Native Americans. 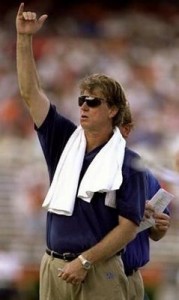 As Mumme prepares for his first season at McMurry, Lexington Herald-Leader columnist John Clay took it upon himself to track down Mumme's UK staff and find out where they'd ended up. What he found was less than inspiring: Of Mumme and his 11 original assistants from 1997, only five are employed at D-IA programs in any capacity; four are college head coaches; two are coaching at the high-school level; and two are out of coaching entirely (though one of them has the convenient excuse of being dead since 2006).

The most successful of these gentlemen, obviously, is Mike Leach, currently leading his rowdy band of pirates at Texas Tech to regular bowl appearances; oddly enough, the guys with the next most prestigious jobs on the list were mere graduate assistants under Mumme. Chris Hatcher is the head coach at Georgia Southern (and being mentioned with increasing frequency as a candidate for D-IA jobs), while Sonny Dykes is breathing life into a formerly moribund passing attack as Arizona's offensive coordinator.

There is, of course, one guy who still rates a grade of "incomplete": Tony Franklin, running backs coach under Mumme and currently offensive coordinator at MTSU. At the moment, Franklin is known primarily for being the catalyst that started the Tommy Tuberville administration down the road to doom in its last year at Auburn, a dubious distinction indeed; but if he can work the same wonders at MTSU that he did at Troy, who knows, he might have a D-IA coaching gig in him yet, thereby eclipsing both his old bosses something fierce. The spread offense indeed works in mysterious ways.