This week Mustache Wednesday pays tribute to a fellow who was taken before his time but still managed to pack more livin' into 51 years than the rest of us probably could in twice that long: Mexico City-born actor and renaissance hombre Pedro Armendáriz. 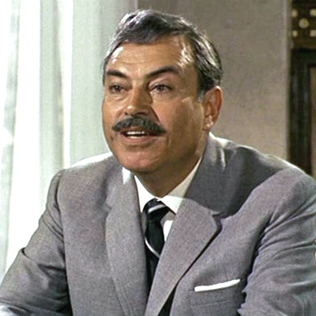 Armendáriz got an engineering degree from Cal Poly and variously worked for the railroad, a bilingual magazine, and the Mexican tourism board, but was discovered by a Mexican film director after reciting the monologue from Hamlet to an American tourist; he went on to appear in more than 100 films, including "Fort Apache" and "The Conqueror." Later in life he was diagnosed with cancer and eventually committed suicide rather than slowly waste away -- but not before toughing it out through the production of "From Russia With Love," in which he plays Kerim Bey, head of Station T in Istanbul and the one man in Turkey who can match James Bond in terms of connections, ladyslaying skills, and sheer badassery.