The U.S. House of Representatives certainly has never had a shortage of complete nutcakes, but ever since former Rep. Tom Osborne (R-NE) declined to run for re-election in 2006 (in favor of an ultimately unsuccessful run for governor), it has been regrettably short on former coaching legends. According to the Orlando Sentinel, though, next year the House may have a shot at bolstering its numbers in both categories: Former Notre Dame head coach and current ESPN talking/babbling head Lou Holtz has been talking to national Republican leaders about the possibility of running against incumbent Rep. Suzanne Kosmas for the Congressional seat representing Florida's 24th district. Granted, there's probably a case to be made that Holtz couldn't be that much worse than must of the fruit cups currently representing us on Capitol Hill, but the mere concept remains so intensely, willfully surreal on its face that there can only be one possible purpose for it: grooming a suitably bonkers running mate for Sarah Palin's inevitable 2012 presidential campaign. 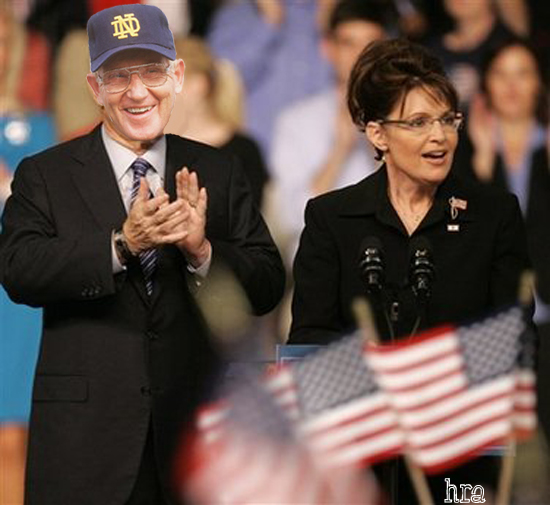 Palin/Holtz '12: In your heart, you know it'd be hilarious.

What kind of a representative/VP would Sweet Lou be? Well, we already know he'd be a big fat no on the Kyoto Protocols. If his continuing close relationship with Notre Dame is any indication, we can also assume he'd swing solidly to the right on all the hot-button social issues -- abortion, euthanasia, the right of Michigan and Ohio State fans to intermarry, that sort of thing. As far as clues from his actual coaching career, we can assume he'd be dedicated to building a strong national defense, but that he'd also follow a fairly strict non-interventionist policy (unless you can find any evidence that his South Carolina teams mounted any offense whatsoever). As far as we're concerned, the wild card here is health care: If he's going to run as a Republican, the obvious assumption is that he's against Obama's health-care proposal, but you have take into account his unclear stance on drug benefits and his casual distribution of advice (as a "Doctor" on ESPN) that was, at best, quasi-solicited -- there's a possibility he'd be down for a lot more government involvement there than the GOP would like. (All together now: MAVERICK!)

As for potential appointments or staff members, it's probably early to be speculating on those as well, but one name seems like a pretty safe bet: Beano Cook as assistant for national security affairs, the Scooter Libby to Lou's Dick Cheney? Yeah, you laugh now. Just see if he doesn't.