Share All sharing options for: ASK THE BIG 10 COMMISH: LAID-BACK ADVICE FROM THE UNFLUSTERABLE JIM DELANY

"In any particular time frame, could be three years, could be five years, could be two years, you could get your ass kicked, OK?" Delany continued. "It can happen. We’re not playing Little Sisters of the Poor. We’re playing the best football teams in their region. 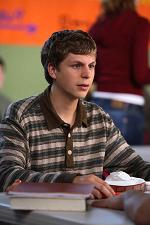 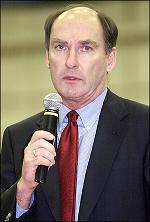 Sounds like a reasonably nonchalant response to the issue, even if, as Doc Saturday humbly points out, it's a problem that isn't likely to resolve itself this season no matter what Delany says. For all the criticism we've heaped on the Big 10 commissioner over the past couple years, he sounds like a guy who takes a level-headed, matter-of-fact approach to problems instead of panicking, which is the kind of trait you'd want in not only a conference commish but also . . . an advice columnist:

Dear Big 10 Commish,
My husband and I have three children: a son who is in college and two daughters, a 16-year-old and a 10-year-old. My older daughter was an A student all through elementary and middle school, but her grades have deteriorated markedly since she started high school. She has a boyfriend now and has been spending a lot more time with him and his clique of friends, and a lot less time studying or helping out around the house; she hasn't been particularly combative toward me or my husband, but that's mainly because we hardly ever see her at all. A couple weeks ago I found what looked like the remnants of a marijuana cigarette on our back patio; I asked her if she knew anything about it and she said she didn't, and that she had never tried marijuana or any other drugs. Can I trust her? Is it time for me to put my foot down and make her stop spending as much time with her boyfriend, or will that only drive her further away?
Concerned Mother in Battle Creek

Dear Concerned Mother,
Yeah, you're probably right to be concerned. But these things happen. Anyplace your child goes, she's gonna run into people or situations that might be less than savory, you know? Sure, her grades have tanked and she's hanging out with people you may not approve of. But go back to her earlier years: She was the toast of her middle school, making straight As, doing well. I'm convinced that with the parenting she has, she'll turn it around no problem. Now, is she going to dominate every year? Is she going to turn down pot every time it's offered to her? Don't kid yourself. But as long as she turns it down maybe half the time, pulls those grades up into B/C territory, she'll get there.

Dear Big 10 Commish,
My wife and I have been married for six pretty happy years, but one thing has never been resolved in our relationship: Her mother hates me. She didn't approve of our relationship to begin with because I worked a blue-collar job and wasn't a regular churchgoer, but even after we got married she continued to make passive-aggressive comments toward me and even criticize the way I raised our daughter, who is now three. Well, I got laid off from my job three months ago, and that's kicked my mother-in-law's critical comments into overdrive: The other day my wife related a conversation in which her mother advised her flat-out to ask me for a divorce. Is it time for me to confront my mother-in-law and tell her to stop making my life harder than it already is?
Son-in-Law Under Pressure

Dear Son-in-Law,
Wow. Tough situation. But in a marriage that lasts any length of time -- could be three years, could be six years, could be fifty -- you could get your ass kicked, OK? We know how mothers-in-law are, and you're not going up against some little sister of the poor here. You're going up against a real overprotective ball-buster. So what do you do? Well, these things are cyclical -- relationships get worse and they get better. So there's no point in rocking the boat, just sit back, keep looking for jobs, and wait for things to get better on their own. And if you really end up in a bind, have another kid, that usually clears up a lot of problems.

Dear Big 10 Commish,
My husband and I are both nearing our fifties, and both our children are in their twenties and out of the house. My husband is starting to show a lot of signs of being clinically depressed. He rose through the ranks pretty quickly at his company but has been passed over for several promotions the last few years, and when he comes home from work in the evening he doesn't even want to talk about his job. He's fallen out of touch with most of his friends and even some of his own family members. I've tried to get him interested in some of the old hobbies he used to love -- golf, tennis, rare book collecting -- but nothing seems to arouse any passion in him at all. Then, out of the blue, he bought a handgun a couple of weeks ago, and one day I came home from work to find him sitting out on the back porch, holding the gun in his hand and just staring off into the distance. I asked him what he was doing and all he said was "nothing." I feel like now is the time to have an intervention of some kind, but . . . how do I even go about it?
Worried Wife in Evansville

Dear Worried Wife,
I know things look bad right now, but you gotta look at the bigger picture here. Over the last 20 years or so, he's maintained a solid career and raised a couple kids who seem to be doing pretty well for themselves -- sounds like a pretty good track record to me. So has his career kind of stagnated? Yeah. Has he lost interest in a lot of the things that used to make him happy? He has. But go back ten, fifteen years ago -- he was getting promoted right and left, he was the toast of his company. Would he be doing better if he were playing in a different company, a different industry? Probably, but it's a little late to be making a career change now. Just let this thing run its course and he'll get back to where he used to be. Sounds like he might have a new hobby in gun collecting, anyway -- try nurturing that, see where it leads. With the career and family he has and a new hobby or two, he'll be fine.