IF THE PAC-10 HOLDS MEDIA DAYS IN A FOREST AND NOBODY'S THERE TO HEAR IT, DOES IT MAKE A SOUND?

Share All sharing options for: IF THE PAC-10 HOLDS MEDIA DAYS IN A FOREST AND NOBODY'S THERE TO HEAR IT, DOES IT MAKE A SOUND?

During one of our post-SEC-media-days evening wind-downs, I overheard our fearless leader Orson, in a telephone trash-talk exchange with one of our illustrious Big XII partisans, describe Big XII Media Days as "the second guy in a DP scene" compared to the SEC. If that's the case, then Pac-10 Media Day must be the guy holding the boom mike, as evidenced by this mob scene (courtesy of Scott Wolf from Inside USC) from new Pac-10 commissioner Larry Scott's podium appearance last Thursday: 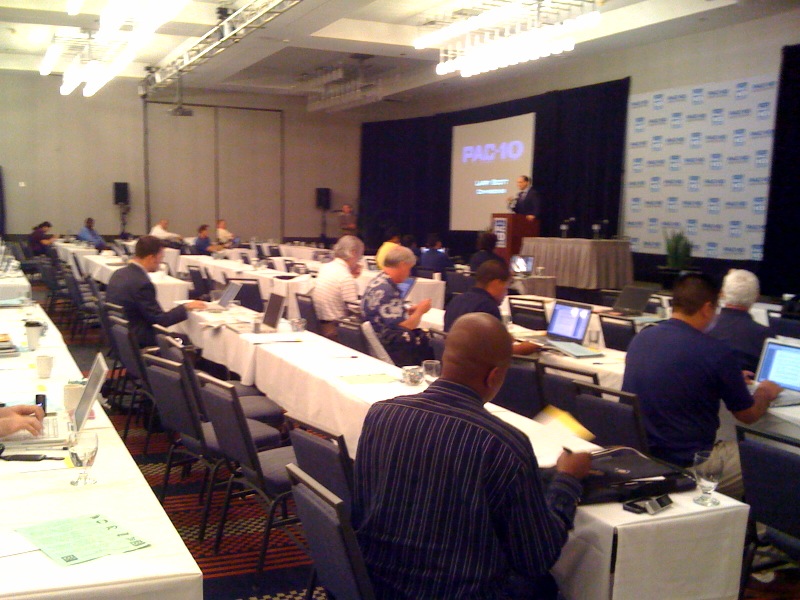 PRESEEZUN BUZZ: UR DOIN IT WRONG. Seriously, Pac-10, that is bush. In the interest of a more literary comparison, if SEC Media Days is "Animal House" -- a lot of shenanigans go on, nobody really learns anything, but nobody gets hurt -- then Pac-10 Media Day (yup, that's Day, singular) is the equivalent of a Tom Stoppard play: very low-key and dignified, a lot of people talk for what seems like a very long time, but in the end nothing happens.

As further evidence of just how much Scott's appearance fizzled, Oregon coach Chip Kelly brought the house down, comparatively speaking, with his explanation of how his spread offense relates to the Pythagorean theorem. (As someone who counts finagling his way out of AP Calculus in high school as one of his life's greatest victories, I find this inconceivable: Math?!? In college football? Too complicated! FIRE BAD!) Even Dennis Erickson's interview with Fanster.com was positively vanilla (not to mention barely audible), with Erickson offering up nary a story about golf carts, volcanoes, drunken sexual shenanigans in the Far East, or any of the other things for which you'd bother to listen to such an interview in the first place.

Meanwhile, even Big XII Media Days gave fans more excitement in a single tattoo on Brandon Carter's skull than the Pac-10 had in an entire day. Clearly, Pac-10, you guys need an adrenaline shot, but we, the SEC, are willing to provide it. How 'bout we loan Clay Travis out to you for future Media Days, just to liven things up a bit? Once you've watched Aaron Corp field the question of whether he's saving himself for marriage, your eyes will be opened to a whole new world of possibilities.