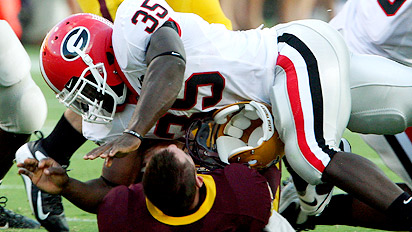 The first warp-spasm seized Cúchulainn, and made him into a monstrous thing, hideous and shapeless, unheard of. His shanks and his joints, every knuckle and angle and organ from head to foot, shook like a tree in the flood or a reed in the stream. His body made a furious twist inside his skin, so that his feet and shins switched to the rear and his heels and calves switched to the front... On his head the temple-sinews stretched to the nape of his neck, each mighty, immense, measureless knob as big as the head of a month-old child... he sucked one eye so deep into his head that a wild crane couldn't probe it onto his cheek out of the depths of his skull; the other eye fell out along his cheek. His mouth weirdly distorted: his cheek peeled back from his jaws until the gullet appeared, his lungs and his liver flapped in his mouth and throat, his lower jaw struck the upper a lion-killing blow, and fiery flakes large as a ram's fleece reached his mouth from his throat... The hair of his head twisted like the tange of a red thornbush stuck in a gap; if a royal apple tree with all its kingly fruit were shaken above him, scarce an apple would reach the ground but each would be spiked on a bristle of his hair as it stood up on his scalp with rage.