MATT STAFFORD WOULD LIKE A HAT IN SIZE SEXTRA LARGE 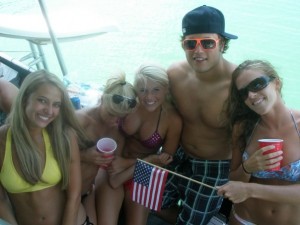 This photo is slightly old cheese, but we'd like to note one thing here: while the rest of you were gawking at Stafford's harem, you may not have noticed the hat. The tremendous, pillbox-sized cloth igloo sitting backwards on his head, a hat large enough to bathe a toddler in should you need to, a noggin cozy so tremendous that holding it out a car window would likely flip anything but the sturdiest of automobiles. We've only seen Stafford sans chapeau a few times, but if his head really is that huge, then he's worth 15 yards per play in the NFL already, as any waving of the arms by defenders within ten yards will result in a roughing the passer penalty. That's a $41.7 million planetoid with its own atmosphere; should Stafford ever be ejected into the cold depths of space, he could survive for three days on his own supply of rich oxygen surrounding his skull.

Summarized: his head is huge. He seems to be doing well, though, for someone whose progeny would easily split a birthing mother in two.