This won't be true at the end of the year due to players getting experience, racking up respectable stats, and the inevitable but unpredictable quantum leaps collegiate quarterbacks take with good coaching and time. (Carson Palmer 2000, bust; Carson Palmer 2002, brilliant Stiffarm Paperweight winner.) For the moment, though, attempting to pick a third-team preseason All-SEC quarterback is hard unless you're picking Jarrett Lee, and then you're just being a cheeky dick. (We'd start him first team over Tebow if it meant the fourteen points free casino credit you get when facing an LSU team with him under center.)

The third team All-SEC starter? Brian Hartline/Steven Garcia, or as we prefer to call him, Stevian Gartline. 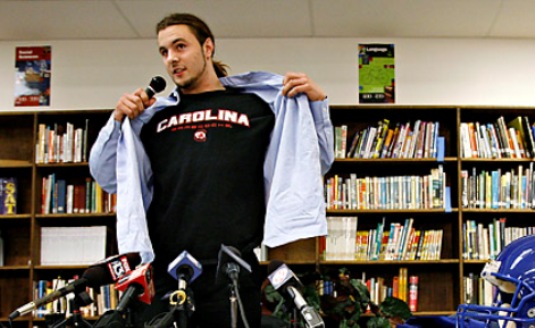 He's a bitch, he's a liar, he's a conservative pocket passer who likes to embark on wild out-of pocket runs, he's a Gamecat with feathers and claws, he's fumble-prone and not, he's got immense talent and a looming BUY rating as a former blue-chip recruit, he's everything in between and no you would't want an any other way. He has four legs, and all of them moving at once means trouble.

(Seriously: How could you not take Jordan Jefferson over either of these guys? And how much rhetorical cropdusting is it to fart upon the third spot by splitting it between two very mediocre qbs?)

Yeah. It's Mike Hartline. We blame society and sleep deprivation for the error.