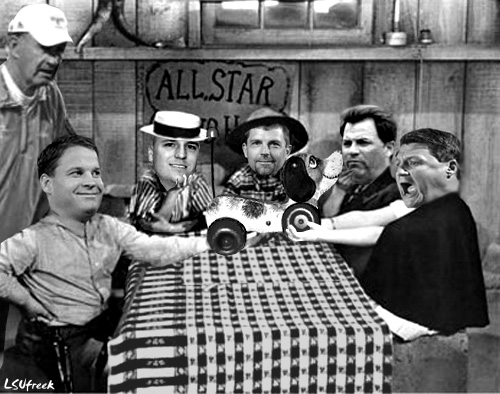 KIFFIN: This meeting of our super-secret club will now come to order! Gentlemen, I have called you all here because you are my best friends and the perfect people to become charter members of the most secret club in all of Tennessee. You can’t tell anyone about our clubhouse or about this meeting, understood?

THOMPSON: I think he said he wants some more potato chips.

KIFFIN: Dangit, Ed, you just ate the entire can of Pringles! If I want more, I’m gonna have to go all the way down and sneak some out of the kitchen, and my dad’s down there! Now, the first order of business is to decide what kind of club this is gonna be, and I’ve got an idea that I think is really —

THOMPSON: Swamp rat, jungle — OK, I have no idea.

KIFFIN: No, no, guys, I already have an idea! We’ll be the "Super-Secret Junior G-Men Club."

KIFFIN: Like a FBI agent. They fight crime and catch bank robbers.

KIFFIN: No, Aaron, I just said we’re gonna be G-men!

KIFFIN: But I already got all these decoder rings! I had to eat five boxes of Raisin Bran to get these! All right, time to vote: Who votes that we become the Super-Secret Junior G-Men Club?

KIFFIN’s hand shoots up, and ORGERON’s and THOMPSON’s follow.

KIFFIN: That’s three votes! So it’s settled — we’re the Super-Secret Junior G-Men Club, and our mission is to foil the plans of evildoers. Now we need to decide on officers. Since this club was my idea, I think I should get to be president. And as president, I appoint Ed my vice-president, since he’s my muscle and my right-hand man.

KIFFIN: You can be the treasurer and handle all the money.

THOMPSON: I want to be prime minister!

KIFFIN: We can’t have a prime minister and a president.

THOMPSON: Russia has a prime minister and a president!

KIFFIN: We’re not Russia. We need someone to take down the minutes of our meetings — you can be the secretary.

KIFFIN: But this club is no girls allowed.

THOMPSON: So what, I don’t want to be secretary! I didn’t even have to come here in the first place, you know — I could be hanging out over at Nick Saban’s house right now. He has a Wii.

KIFFIN: And Aaron, you can be the secretary.

AUSMUS: Why do I have to be the secretary?

KIFFIN: Because we need one and there’s no one left! Now that all that’s decided, we need to recruit more members. Ed, you take the neighborhood around the lake, Eddie, you take the mall . . .

AUSMUS: And then we go foil the plans of evildoers, right?

KIFFIN: No, once we have about a dozen members, then we have a big club meeting with all the new members, and we’ll talk about how to recruit even more people.

AUSMUS: Um, are we ever gonna do anything besides recruiting?

KIFFIN: Do you want this to be the biggest secret club in town, or not?

AUSMUS: If all we’re gonna do is go out and recruit more members, I don’t know if I even wanna be in this stupid club!

KIFFIN: Then guess what, you’re no longer a member! You're banished from this clubhouse!

AUSMUS: FINE! Maybe I’ll go back and re-join Steve Spurrier’s club! HE has a national-title ring!

AUSMUS storms out the door and climbs down the rope ladder to the ground, and stomps off in a huff.

THOMPSON: Think he said we’re gonna need something for our new members to do, so maybe we should do something besides recruiting.

KIFFIN: Yeah, I guess we’re going to have to launch our mission against Urban Meyer eventually.

KIFFIN: No, we can’t actually fight him until we’ve recruited more members. Let’s . . . leave a mean note in his mailbox!

KIFFIN: Eddie, since our secretary has been banished from the club, I’m appointing you temporary secretary. Write this down: "Dear Urban Meyer . . . you, uh, don’t know who we are, but we are your worst enemy, and . . . uh . . . we’re going to sing ‘Rocky Top’ all night long after we defeat your club! And we will have a BLAST! Signed, Lane Kiffin’s Super-Secret Junior G-Men Club."

GRAN: Wait, should we put it in code with our decoder rings?

THOMPSON: Yeah! Put it in code! Then he’ll be even MORE confused!

KIFFIN: Uh . . . guys, I don’t actually have the decoder rings yet. It said they take six to eight weeks for delivery.

GRAN: Should we put it in his mailbox anyway?

KIFFIN: No, no, let’s wait until we have the rings. For right now, let’s just concentrate on new members. Who else do we know that we can recruit? . . .

The treehouse begins to shake ever so slightly, and presently the wizened face of Lane’s dad, MONTE KIFFIN, appears in the doorway.

MONTE: Goddammit, Lane, are you still up here?

KIFFIN: Jeez, dad, we’re trying to have a secret meeting here! We’ve got all these new members of our secret club to recruit!

MONTE: You know what you should try? Recruiting some answers to your homework.

MONTE: Or how about that playbook project you were working on for school? I told you I’d help you out with the defensive part, but I’ll be damned if I’m gonna do the whole thing for you by myself. You gonna get to that or what?

KIFFIN: As soon as we finish with our meeting!

MONTE: Five minutes, young man, and don’t make me come up here again, ‘cause next time I’ll be comin’ with my belt.

KIFFIN: Fine! Five minutes! Just leave us alone so we can make our list of new members!

MONTE: Fine. And maybe while you’re at it you can make a list of places where that can of Pringles might’ve gotten off to.

MONTE, grumbling, clambers back down the rope ladder.

KIFFIN: God, my dad is so embarrassing.

THOMPSON: Something about Lane’s dad having a bunch of Playboys in his workshop.