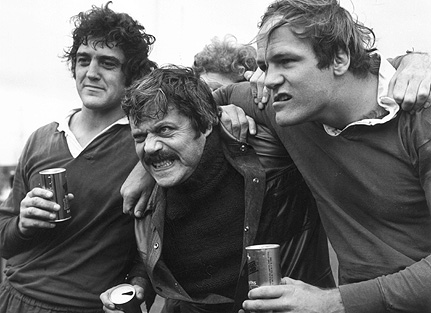 Don't even bother searching Youtube for "Oliver Reed drunk." You don't have enough time in your day. Oliver Reed completes the Four Horseman of the Mid-20th Century Alcoholcalypse along with Richard Harris (who discovered Hawaiian tropical drinks and wandered into traffic punching cars,) Richard Burton (two bottles of vodka a day,) and Peter O'Toole, who only avoided making the atrocious movies the others made by staying in the bar even longer than the others did.

Reed was fond of rugby, fighting, arm wrestling, and had a tattoo of an eagle's claw on his genitals. A journalist once asked him if he drank 104 pints during his second bachelor party, to which he responded, "No, that was in Guernsey a few years ago." He outdrank Lee Marvin. He appeared constantly drunk on not one, but on a series of British talk shows toward the end of his life, including one where he performed "Wild Thing" with Ned's Atomic Dustbin. He realized he had a drinking problem where all of us realize these things: when he was lying prone on the baggage conveyor at Galway Airport. He vomited on Steve McQueen after a marathon bender in 1973. He was once pulled naked from a giant goldfish tank while ranting "You can't touch me! I'm one of the Four Musketeers!"

Whether his life was an accomplishment, a warning in the form of one long incredible bender, or something else entirely, we can't really say. But instead, let's just say that it certainly happened, and happened with great vigor. At the very least, stand back and gape in awe at it, especially when you consider the final salvo Reed fired over the bow of good sense in his death:

Reed died of a sudden heart attack[1] during a break from filming Gladiator in Valletta, Malta on 2 May 1999. He was 61 years old and was reported to be heavily intoxicated at the time of his death. Racking up an $866 alcohol bill, Reed had reportedly drunk three bottles of Captain Morgan's rum, eight bottles of beer and numerous doubles of Famous Grouse whisky. He also beat five much younger Royal Navy sailors at arm wrestling at a bar called "The Pub." (The owners have since added "Ollie's Last Pub" to the sign.

We salute you, Oliver Reed. If you hear something stumble, punch a wall, and laugh before vomiting, stumbling, and laughing again in a Wimbledon pub one day, it's him.

Holly: Ommegeddon. Like any real patriot, I was hanging out at Green's on Ponce over the holiday weekend, and Doug threw this bottle in our basket because it had a mushroom cloud on it:

And despite being referrred to as "funkhouse ale" on the label, it turned out to be really good beer, America the beautiful, the end.

Orson: Cape Fear Punch. America, at one point in its increasingly awesome history, had to resort to pooling resources to get trashed. This was called punch, a drink so evil and subtly powerful it comes from the Hindi word "panch," meaning five. A name of such simplicity can only exist as testimony to how completely drunk someone can get guzzling tasty, sneakily strong booze from a bucket all night, since in the morning, all one could really do was open one bloodshot eye and answer the query "What happened to you?" with the words "RGHHHRGHGHHH FIVE HARKHHDGHHHH." Then, you'd have to go plow a field all day, or wander through excrement-filled streets where you could be killed by simply stepping on a rusty piece of metal. (Living now is awesome and do not forget it.)

Cape Fear Punch is the most face-melting of the punch family. Read the recipe if you dare: it involves no less than 4 whole bottles of various hooches thrown into a mixing bowl, though if you're real classy you'll just mix it up in a sink like we do. (Or better still, in a bright yellow janitor's bucket. Class is an aerosol that seeps from our pores like Axe Body Spray.)

Holly: All right, next offseason we're all taking a field trip to Dorset and throwing down at the world stinging nettle eating championships. What could possibly go wrong?

Not surprisingly, the rules are tight for this level of competitive nettle eating.

Only nettles provided by the organisers can be eaten, competitors are not allowed to bring their own, no mouth numbing substances are permitted - although a swig of beer in between mouthfuls is always encouraged.

And for spectators, it makes for a bemusing sight. Competitors have described their unusual bar meal as tasting like anything from "rancid salad with no dressing" to "a mixture of spinach and cow-pat".

(Oh, and it's attached to something called a "charity beer festival". Bangarang.)

Orson: The Chik-Fil-A sandwich. We don't live in America...yet. The more perfect union spoken of by our forefathers will not exist in full until each and every one of you can drive, walk, crawl, stagger, or autogyro down to a conveniently located Chik-Fil-A, order a number one, and open the sturdy white insulating bag of happiness to find this bundle of joy and two carefully nestled dill pickles staring back at you like a wide-eyed newborn: 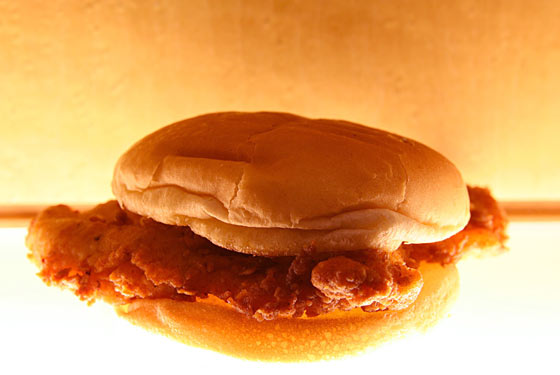 There was a point in your youth when, as an elementary schooler living in an exurb, you'd get crackhead excited over the opening of a new restaurant. OMFG MOM!! IT'S AN ARBY'S!!! HAVE YOU HEARD?!?!? THEY SERVE SHAVED HORSEMEAT!!! I WANT SHAVED HORSEMEAT AND A DRY TURNOVER OR I'LL DIE?!?!?!?!?!!!! This is still how I react to the news of a Chick-Fil-A opening, even if it is in fact a huge Chick-Fil-A announcing the construction of a smaller, miniature Chick-Fil-A inside the larger Chick-Fil-A, or if they are in fact across the street from one another. The American flag should be flown upside down until each of you can enjoy this in your neighborhoods, where you can taste the only sandwich really worth holding a bus full of screaming, terrified children hostage over.

Orson: Exploding hammers. Watch until the end. Once, in Las Vegas, we saw a guy lean out of a window and yell at a rowdy SUV limo full of insanely drunken men, "Y'all doin' it like a motherfucker! Like a real motherfucker, ya hear?"

The guy at the end is doing exploding sledgehammers, and he is indeed doing it like a motherfucker.

Holly: I don't know anything about this girl except that I want her to be my best friend. We can braid each other's hair and make necklaces out of shell casings.

Holly: If James Bond had been not British but a German super-spy looking to help his nation shed its Nazi past by aligning with the West and halting the advance of the Soviet menace, Q would've assigned him a Mercedes-Benz 300SL, the fastest street-legal production car on the planet when it was introduced in 1954. The 300SL didn't have gullwing doors because they were cool or because Mercedes was crossing their fingers and hoping against hope it'd get included in a potential Michael J. Fox/Christopher Lloyd movie franchise 30 years later; the doors were needed to accommodate the structure of the car beneath, which was basically lifted intact from the Le Mans-winning W194 race car. The Gullwing could go from 0 to 60 in right around seven seconds and keep going past 150 miles per hour, and while it cost nearly $90,000 in 2009 dollars, that was just the price you'd have to pay if you wanted to impress the likes of Sophia Loren (who replaced her boring old luxury sedan with a Gullwing in 1955, not that she needed to look any sexier): 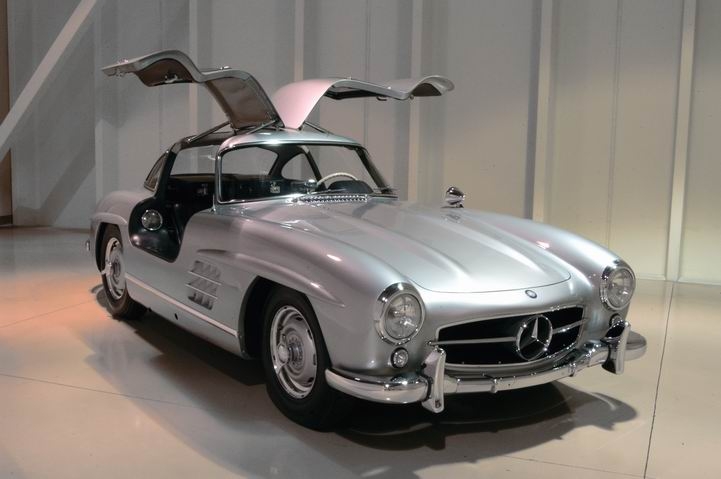 Keep your Maseratis and your Beemers: A 300SL driver is someone who appreciates the finer things in life, tips well, and exudes more cool sitting on the john than most of us do in our very best moments. And the valets always park his car right out front. 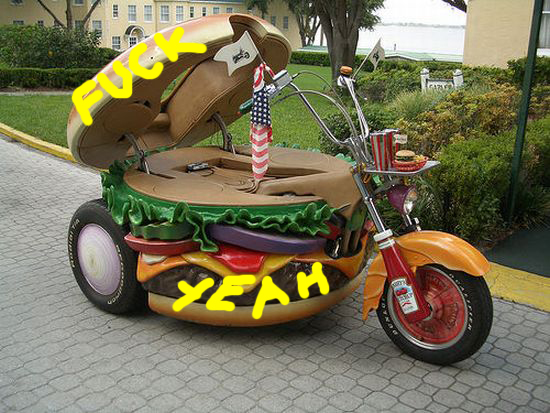 The only thing funnier than watching someone actually drive this would be watching someone drive it while attempting a drive-by flamethrower attack on a Rose Bowl float full of clowns, because fuck a clown. No technical specifics are listed in the description of the Burger Trike, but my keen automotive eye is pretty sure that looks like a vehicle capable of achieving speeds of up to eleven million miles an hour, give or take wind resistance.

Holly: In 1963, Walt Disney ingested some weapons-grade hallucinogens and thought it might be a fine idea to construct a thatched hut full of robotic singing birds to terrify children with. The result was Disneyland's Enchanted Tiki Room. The Florida version has since undergone a series of unneeded upgrades, but down in Anaheim that's all it is to this day -- a cool dark room full of feathery animatronics that breathe, croon, and insult each other for ten minutes at a stretch. They're getting up there in years and for parts of the show you can barely hear the songs over the clacking of metal beaks, but it's all part of the Tiki Room's sinister, vaguely horrifying charm: 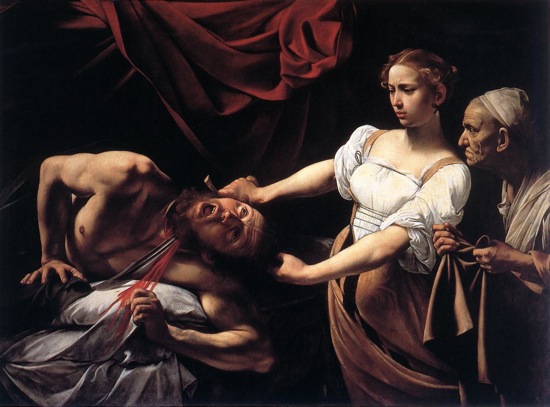 The Sam Raimi of the 16th century, Caravaggio was fond of street-brawling and paintings they don't show you in Art class because Art class, for one reason or another, doesn't appreciate jets of blood quite like you do. The expressions here are what merit praise:

Judith: Are you sure this is how it's done?