JULY COLUMNS ARE THE MOST FISKALICIOUS

Share All sharing options for: JULY COLUMNS ARE THE MOST FISKALICIOUS 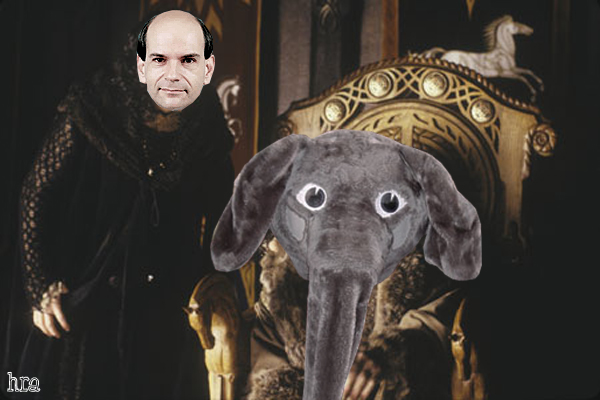 It's July, when most people hit the beach for a week and give up on doing anything put picking sand out of sandwiches on the beach and collecting future melanomas. Except for brave football columnists like Paul Finebaum, who soldier through the heat, looking to start fires with the most inflammatory of column fuel. We'd call it stirring the pot, but stirring implies some training and skill. This is more akin to a crackhead slapping the side of a burning oil drum in an alley with an oar until someone notices.

We know. This is what Finebaum does, and it makes him lots of money. Like Nicholas Cage's hair or watching a highly paid coach botch time management at the end of a half, It doesn't make it any less point/laughworthy.

Sampled only as needed, with helpful elision provided to eliminate chaff (i.e. the sensible and factual parts of the column.) Also, consider the following things totally accepted as possible:

1. Urban Meyer could totally leave Florida at any instant.

2. Paul Finebaum has done fine work as a columnist in the past.

3. Paul Finebaum could really now be writing his columns by Mad-Lib.

The rest, vivisected as follows:

Urban Meyer is probably leaving Florida after the season to go to Notre Dame. Meyer says he's not going. He insists he loves it in Gainesville and has no intention of taking a position he once described as "my dream job."

So how do I know Meyer is not telling the truth? Easy. Meyer's lips moved when he denied the story.

Be sure to put that in its own line, because that one kills! He lies! There's an edited version where he also says the same thing about Bobby Petrino, Lane Kiffin, and even Nick Saban. He's just saving that for when the time is right, and he can put another Mad Lib column up accusing a coach of leering at another job. Seriously, you will see this paragraph in a Finebaum column in the next two years:

We'd do the same with columns, but when it comes to "Coach's Name" we always fill in "FART" just like we did in third grade. Moving on:

Perhaps there was a time when Meyer was about what's right in college football. They say he was just a normal guy out in Utah. Maybe he was even a decent cat for about 24 hours in Gainesville. Since then, Meyer has become obsessed with success and power...

Same guy so obsessive he used to do full-throated motivational speeches to nearly empty rooms at Bowling Green. Sure, it was exposure to the ambient creeping evil in the 352 that did it. That's a much more logical explanation. Some twaddling on about how obsessed Meyer is with Notre Dame follows, and then some obvious notes about roster losses post-Tebow, and then the requisite manual genital manipulation of his audience:

"That's raight, Paul. Grip it closer to the base. Yeah, don't be afraid of hurtin' it. Just don't block my view of the Bear Bryant shrine over there. I can't get where I want to go without it." We just watched this game last week on CSS, and it was close, well-fought, and came down to Florida having a quarterback, and Alabama almost having a quarterback. The only bullets we saw in the fourth came off the arm of Tim Tebow to Louis Murphy against spectacular Cover 2 defense by Alabama. That wasn't dodging a bullet: it was beating the second best opponent we played all year, and a fine, fine football team.

Next: INSANE CONSPIRACY THEORY ABOUT THE UTAH GAME. Not even worth discussing, unless to note that if the prior statement was blatant ball-strokage of the Alabama fanbase, this is the prostate tickle for Hoover-area conspiracy theorists. Meyer had a national title game to prepare for, his offensive coordinator to replace, a new OC to move in, and a pile of recruiting. Also, Utah needed little help against an Alabama team playing without its starting left tackle and a Utah defense all too aware of what pressure points to hit.

Nevermind the disservice this pays to Andy Ludwig, former Utah OC and current Cal assistant, who allegedly took issue with Saban's insistence that Alabama should have won by three TDs in the game an off-season clinic. You could say, "Hey, that's a message board." Given the source text we're looking at here, even wacky message board hearsay is just as admissible in this kangaroo court as a Finebaum column.

Former Utah OC Andy Ludwig was in attendance for Saban's lecture. Ludwig, who is now the OC at Cal, presented Thursday morning and took a little offense to Saban's remarks. Ludwig opened the lecture by saying "I try to keep everything simple. You know, I sat here last night and listened to a man say how he had 30 different ways to run cover 2, and I'm just sitting there thinking to myself, 'geez, I only have one way to run a dig route'. But you know what? That one way was more than enough to beat him." (he was talking about Saban)

Later, towards the end of his speech he said, "You know, I'm sitting in the audience and I hear 'We should have beat Utah by two TDs' and I almost stood up and said, 'yeah, but you didn't.' It's kind of hard to win by two tds when you're down 21 points in the first half."

It was easy enough to figure out how to beat a somewhat depleted Alabama team: play precise ball, pressure the left side and John Parker Wilson, and you stood a good chance. Also not to be overlooked: Utah 2008=really freaking good. So now that we've painted this as inaccurate in three different directions, let's move on. Ninja says lazy streetfighter always follows with slow roundhouse. Ninja is right:

In case you don't own a police blotter -- or have the DVD collection of the television series "COPS" -- the Gators recently celebrated their 24th arrest since Meyer's arrival.

We recommend the 3-pack with "Bad Girls" for the seasoned viewer. For the novice, the third season offers a particularly moving episode involving a meth head stuck shoeless on an metal roof in Las Vegas. For the college football fan, we'd point out that everyone else got done spluttering about Florida's arrest about two months ago, and that after that Finebaum probably edited out a reference to a Sarah Palin joke, because even he realized they're played out, and that his primary readership would elect her and Elizabeth Hasselbeck to the White House, but only if they promised to make out at the inauguration ceremony topless. (Rich Lowry just shot off in his pants thinking about this. If you did, too, well...we don't judge. You have that happy moment.)

Meyer has four years left on a contract that pays him well north of $3 million a year. He works at a school that recently cut $40 million from its general budget.

UAA pays Meyer's salary in full and runs a surplus. The budgets are only connected semantically, and UAA is in fact giving six million back to the school this year in a recession. But please: take the offramp to hackeneyedconclusionville in the name of your column. You're losing the grip there, and may need more lube.

Then a bit more stroking of the Meyer-to-ND rumor, and calling Machen "megalomaniacal," (irony! it never dies,) and then the coup de grace:

It is unlikely Meyer has to worry about falling as far as Donovan (who is no longer even considered the best coach in his division). However, for all of the beatings Meyer has put on and will likely continue to put on schools this fall, he will become the hunted next year. His arrogance (see Ole Miss debacle last year) won't be able to handle that.

BECAUSE HE'S FRAGILE LIKE A FLOWER!!! Meyer plans on coaching next year wearing black and with his nose in a copy of Twilight, because he wishes his skin sparkled in the sun like a sexy but sensitive teen vampire, too! He may just go someplace where he can win all of his games easily, like...um...Notre Dame. Yes, that all makes perfect sense.