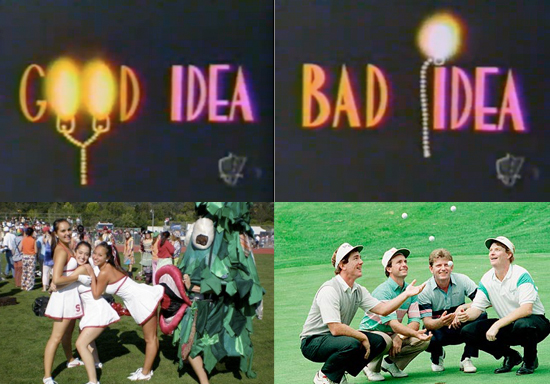 Good Idea: Their motto sucks, and Tree remains the kind of mascot you can have if your average attendee as a university is so wealthy the very act of having a mascot is an Illuminati thumbnose at the poor proles from other universities who will spend their lives bleeding money into Stanford graduates’ cash traps. Did we say Illuminati? We apologize. There is no such thing, you didn’t read that, and we’ll go type the rest of this from a constantly moving RV until things die down a little bit around here.

A good idea is expecting Stanford to take chunks out of several asses this year.

Toby Gerhart at running back leads a rushing account consistently in the black last year (200 yards per game) and capable of protecting their still less-than-impressive passing game. (Harbaugh sees improvement, but of course he does, because he’s a football coach not named Urban Meyer. "I’d like to murder our running backs with blunt objects, frankly." Thanks, Urban!)

They also get a ton of home games (five,) have a dynamic young coach in Harbaugh, and play the round-robin schedule, meaning they’re bound to catch one or two of the Pac-10’s flagship programs with their pants down, and then it’s ass-bitin’ time for college football’s most arrested mascot.