The long delayed Fulmer Cupdate is brought to you by Brian, who his hung like Reggie F'n Nelson, and by the city of Pullman, Washington. Pullman: Way more excitement than you thought possible on the edge of Idaho! 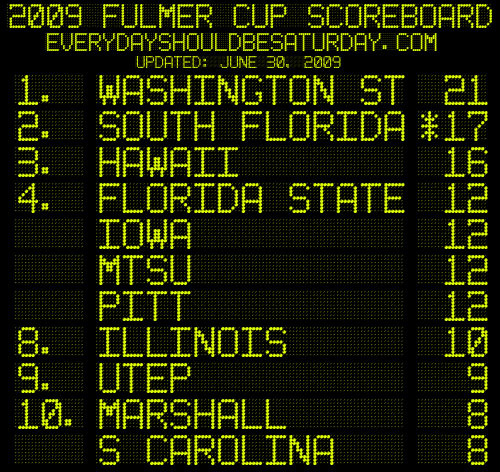 For the enlightened conspiracists out there: The Trilateral Commission decreed it, and then confirmed the call with the Elders of Zion, who then ratified the dismissal of affray charges against Janoris Jenkins with Quantum and the Gnomes of Zurich. Broadcasting the orders over special high-frequency radios through Chinese Triad contacts based in Mormon temples across the world, who then executed the orders through Mara Salvatrucha operatives with links to Opus Dei and the Carlyle Group to intimidate the judges in Alachua County to make the charges go away, debase the US Currency, and simultaneously undermine the University of Tennessee and Georgia programs while clearing the way for ONE WORLD GOVERNMENT.

Either that, or there was no evidence to hold the charges any further against Jenkins. Believe whatever you like because you will, but whatever you decide don't touch Janoris' chain. He values it deeply. Florida now falls off the Big Board, unable to keep the torrid late pace of the summer stretch of the Fulmer Cup season.

Setting said pace: Washington State, who with the arrest of a current player and two former players on felony burglary put on the burners and stretched the team lead over Hawaii to five points. Overtaking the Cougars at this point will take a blitz of bad behavior or some Jimmy Johns-esque solo work from someone on the Big Board, as the likelihood of WSU earning more points over the summer is roughly inverse to their chances of winning more than three games this season. (Good/not good at all, fractionally speaking)

Formal point tally, btw: four points, three for the felony, and one for doing it with two former players and making it a team-building exercise.

"It was a simple DUI," said Lt. Herb Crosby of the Riley County police. "An officer observed some erratic driving, stopped (Fitzgerald) and arrested him for DUI."

Come on: you can't even pique the interest of a jaded cop? No interesting zigzagging, or a chaotic but entertaining detour through a shopping mall? Or even artistic use of road flares during the arrest? You bore them, Wildcats. Entertain them. Washington State football players would.

The Battle DUI: earns two points for Arkansas, though we almost assigned a bonus point for the stupidity of earning the DUI by hitting the woofers so hard the police pulled you over for violating the local noise ordinance.

Urrbody on the street gett tipzay. One point for public intox for Iowa State, as it is defined as a one point offense under the Fulmer Cup rules, and because drunks have to walk around, too, dammit. When will our nation be as free as Cardiff, Wales? Someday soon, we hope, you puritan jackoff monkeys who insist on "sober walking" and "not passing out in the bushes." "Again."

Tears. Just pay tribute by peeing in the closet, and take your drawer full of keys when you go hunting or fishing, you lucky bastards. His kind shall not pass our way again.