WHITHER THE MAGNIFICENT, DEAFENING AIRHORN?

Share All sharing options for: WHITHER THE MAGNIFICENT, DEAFENING AIRHORN?

We're broadcasting live from McCarran Airport, where we're waiting to leave the glittery hell of Las Vegas where we plumbed yet another new low in our athletic ineptitude by playing perhaps the 25th or 26th game of ping-pong in our lives against people who can do it with their eyes closed and a beer in their hand. It would have sucked, but grading ourselves against anyone there is like expecting a bear with oven mitts to land a helicopter cleanly and safely. It's not even really a question of "how bad" so much as "Why, and with how much fire and screaming involved?"

Over this same sleep-deprived weekend we watched the United States cocktease the universe before getting a harsh tutelage by Brazil in South Africa at the Confederations Cup. The star of the tournament was the vuvuzela, the infinite farting noise you heard in the background of all the games of the tourney made by horns tooted incessantly by South African fans. It got us to thinking: What noisemakers not currently utilized by college football teams should be employed by whom, and in what fashion?

There's only one clear answer, dear reader, and it starts with "air" and ends with "motherfuckin' horn." 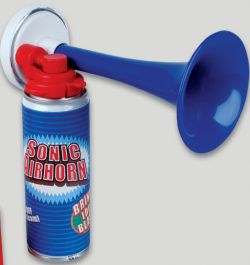 Annoyance rating: 10/10. Probably a 15 yard unsportsmanlike penalty waiting to happen, but who cares because you'd never hear the call anyway. Or anything ever again, really. Not a renewable resource thanks to short shelf-life, and expensive to replace over the course of a season. Hot upside: when thrown, they stand a real chance of concussing someone. When employed by 10,000 at once will make players claw their faces off with frustration, much like the [NAME REDACTED] Coachin' System for Gettin Better 'n Better™ and a well executed triple option.

Team to click: Real threat of physical harm combined with near total hearing loss and hail of garbage? Temple University, your signature move is just waiting. Philly fans and airhorns are match almost as tasty as Philly fans and so, so many other things: stabbing, throwing bottles at each other's heads, cheering paralysis on the part of an opponent, and general acts of malice. Alternate Match: Wisconsin, but only for the free-flowing riots resulting from that many drunk people firing airhorns at each other over a span of three and a half hours.

Also accepting nominations for: triangle, taiko drums, rape whistles, bass cowbell, 10,000 old smoke detectors all set off at once, everyone in the stands playing the "Sex And The City" ringtone at once (feminizing effect FTW!).