Oh, hello! I'm T. Boone Pickens. you've caught me walking out of my private duck blind. On my ranch. Which is on a boat. In a lake. On my yacht. Which floats in another lake on a floating solar-powered island constantly roaming the seas of the Earth in order to avoid taxes. 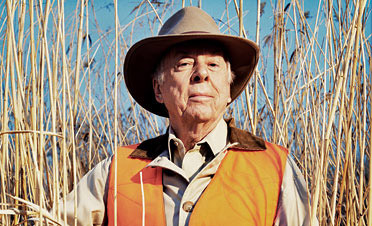 I just want to remind you that you can say anything when you're as so stinking rich you smell like the very carcass of success rotting away into a pile of hundred dollar bills, especially if you write it in italics.

Some are awed by me. I never will forget, two years ago, some big ol’ kid came through the athletic department. Holder said, "This is Boone Pickens." The kid said, "Are you alive? Your name’s on the stadium. I didn’t know they put your name on the stadium unless you were dead." I said, "I came back." The kid said, "I can’t believe this. I didn’t know you were alive."

In all seriousness, T. Boone Pickens is the ballingest 80 year old on the planet. When he buys the oxygen rights for Metropolitan Norman, Oklahoma and forces the Sooners to play in SCUBA gear on the field in 2011, we'll see who knows if he's alive. Thirty million, Stoops? T. Boone spends that on hovercraft maintenance in a week.