Share All sharing options for: NCAA 2010 DEMO: CONSTANTLY PURRING IN ALL DIRECTIONS 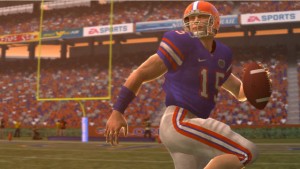 A few observations and outright belly-rubs for the demo, now downloadable on XBox Live:

It's Tebow. Yes, the player is GENERIC DUAL THREAT WHITE QB OF NONSPECIFIC NAME. But if there's any evidence fo the loving caretakers slather on the franchise, it's the animation of Tebow, who runs the QB power play in the precise manner as he does in real life: shoulders forward, bouncing off of tacklers, and falling forward for three yards like an albino sequoia timbering earthward. Legal issues of player compensation aside, it's beautifully done. (The players even seem to throw like the players, though our virgin eyes might just be excitedly reading that onto the general animations of the game.)

Yay aggression. The big and ever-so-slightly intrusive new game feature is a quick check chart allowing you to check whether you want your team to play aggressively, conservatively, or somewhere between the two. You can choose specific options here, too: go deep if the play breaks down on passing plays, for example, or whether to always go for the pick or the strip on defense, etc.

The interface pops up once or twice too often for our tastes, but being an ADHD button-masher means slapping the "B" button to get the thing off the screen becomes second nature after a few games.

It does yield results, however, and could be great fun--especially when you play your neighbor who decides to ball out all aggressive-like and ends up dying in a hail of play-action passes, screens, and draws. We put the Florida D on aggressive, and three drives yielded "INT-80 yard TD--Fumble recovered by OU, then long run on aggressive but ineffective attempts to strip the ball." We're a bit ambivalent on the feature, but it works like hell, so give them credit where credit is due on that.

Ever closer to reality. The gameplay itself continues to warp closer and closer to actual gameplay. We cooed out loud when Sam Bradford was hit on a play mid-throw and the ball, rather than fumbling out or mysteriously rocketing towards the pre-determined receiver anyway as would happen in previous editions, actually floated in the air like a lame duck and into a throng of DBs and wideouts attempting to pick it. Passes were batted down, but only when we hammered the ball on throws: slants worked, but only when our receiver had position. The deep ball is no guarantee, but if you set it up and take control of the receiver, you've got a sporting chance (as opposed to the automatic life-fucker it could be in previous editions.)

The most improved bit seems to be on flow plays, especially in the run game. Blocks happen not as static poles you weave around, but as evolving fights that may or may not be there on the play. Weaving OU's running backs through the Florida defense was beautiful, since you actually had to read the play to salvage positive yards on a play. These are all individual tweaks, yes, but collectively they bring the game another step closer to channeling reality through your XBox.

ERIN ANDREWS NAKED ERIN ANDREWS NAKED. She's in the game, but only as a sideline reporter in the demo. But we've heard that she's naked in the real game if you enter BLOGGER DESPERATELY SEEKING PAGEVIEWS in the cheat menu.

More ways to blow a play completely: Two minute quarters didn't really give us much of a chance to set up plays, but work out of a formation enough times, and the AI begins to tip you to tendency plays, i.e. running the HB Iso to set up play-action passes out of the same set-up. They work, and unlike some editions of the game they have play-action pretty well balanced between "OMG Instant 6" and "WTF 15 yard sack and injured qb." Also, it's fun to tell the computer to eat ass and pick a play with a green "1% tendency" flashing over it. You've been Hal Mumme'd, Xbox.

Also new: a defensive key feature where you can tell your defense to look for a certain play. It's a simple and intuitive control, and yet another way to you can allow Deonte Thompson loose in the secondary for a 45 yard TD as we did in one demo game. Like most fun fripperies in the game, it's not forced on you, so if you don't like it you can play the whole thing without ever messing with it at all.

Player Lock: Playing from one player's perspective the whole play from a rear view, as opposed to getting vertigo seeing it from the player's helmet. Handy on defensive line, disastrous in the secondary unless you really like totally missing easy picks and watching wideouts run past you taunt-farting you the whole way.

And yet: There's more. There's a whole "Road To Glory" feature where you'll be able to have Kirk Herbstreit talk about you to Erin Andrews on the phone, which will be interesting once because the computer characters a.) do not have sex, and b.) Kirk does not, on the 17th time through, start speaking in an easter egg track about the time he and John Cooper robbed a convenience store in Indiana just for the thrill of it. Also, even more timesucking detail in recruiting if you want it, and online group dynasties (EDSBS will have its own league this year,) and tons of other shit you may or may not choose to use. It's all disgustingly detailed and lovely.

Finally: They have camera flashes, nets behind the field goals that mean more ad cash for the game, and windsocks blowing on the field goals to tell you the wind direction. Also, the timer on the play clock begins audibly ticking when you get deep into false start territory. That's the spot, EA: right there on the subtle, non-intrusive game-feature spot on our belly. Yes, just like that. We're like a Great Dane, and will just lie here all day while you do that.