FULMER CUPDATE: THE BIG BOARD HITS A LULL

Share All sharing options for: FULMER CUPDATE: THE BIG BOARD HITS A LULL

The Fulmer Cup Big Board, tended as always by the Reggie Nelson-sized-tackle-dragging Brian, returns this week full of naught but tiny points tweaks and a single, lonely Nebraskan arrest warrant blowing about the waving cornflowers of the Great Plains... 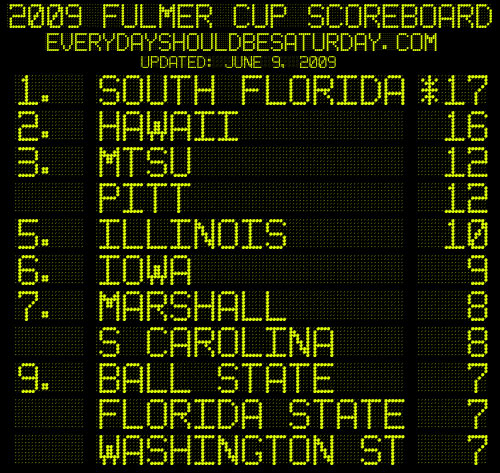 I-back to the Future. Nebraska picks up a single point for the negligence of I-back Quentin Castille, who failed to appear in court over a trio of missing license plate charges, and will instead be brought in on the proactive tip by the Lincoln law enforcement community for wasting the judge's precious time. This does not count as the kind of jail experience one can brag about, sir. Gucci Mane this does not make you.

Carl Johnson, finally off the books. The points awarded to Carl Johnson and erroneously left on the books after their dismissal have been returned to the cookie jar, since the charges were dropped after a judge realized at an attorney's urging that a man cannot break a restraining order he does not realize exists. Carl Johnson has peacefully gone back to watching his girlfriend just like the rest of you do, which is through an open window with a powerful infrared telescope.

Otherwise: The long quiet gulf of June awaits, smooth, ripple-free waters sure to be interrupted by a bar brawl on a hot evening or a Florida Gator affray charge of some sort.