Share All sharing options for: 29 ALTERNATE NAMES FOR COLT MCCOY

You will get tired of hearing his name, especially when ABC begins to pump its Big 12 lineup starting in October and you start looking LIVE at Brent Musburger's face-plant into the Big 12 South schedule. This won't be Colt McCoy's fault at all, because he's quite good, and guilty only of that and playing for a high profile team and probable national title contender (along with perennial stiff-armed trophy candidate, if you care about that sort of thing.) 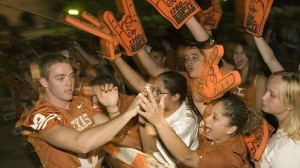 Ahhh, Colt McCoy, WHATTAPLAYA: Prepare for a Musburgering unseen since Maurice Clarett and his lint roller rolled through the dirty streets of Columbus.

It's a shame repetition bleeds the novelty out of even the weirdest things, but it happens. Therefore, college football fans, we present the Official Alternative But Equivalent Names for Colt McCoy for 2009.

Use them well. (Inspired by this, of course.)