TONY FRANKLIN SPILLS ALL AND SHOCKS NONE

Share All sharing options for: TONY FRANKLIN SPILLS ALL AND SHOCKS NONE

In news that will shock absolutely no one whatsoever, Tony Franklin does an interview that ran in the Montgomery Advertiser this past weekend where he suggests the overall vibe at Auburn is somewhere between that of Elsinore-in-regal-crisis and the KGB-era Lubyanka prison in full blossom. If this surprises you, congratulations: you are a deeply deluded Auburn fan, and probably already subscribe to the conspiracy theory of this having something to do with an impending ruling on Alabama. SPIES EVERYWHERE WE TELL YOU. 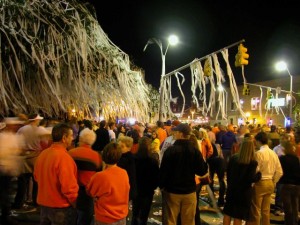 Lubyanka on the Piedmont: Auburn.

(For sanity--if you're into that poison--is at Joe Cribbs' Car Wash, as usual. It's slow and Tony Franklin likes to talk. Voila! Off-season piece!)

Only the finest niblets from the place Terry Bowden fled in the middle of the night with his binkie and sippy cup in hand from the article follow.

"It was the most unusual place I've ever been," Franklin said of the Auburn program. "No one liked anybody else. There was this deep distrust of everybody. The coaches didn't trust the administration, the administration didn't trust each other or the coaches. It was very strange and very unnerving. You would walk down the halls and there would be tension you could just feel.

On Auburn coaches and religion:

"That's all they do is pray -- and talk about praying and religion," Franklin said. "It's a constant thing with them, and it's just overwhelming at times. A lot of people use religion as a crutch, and I think that's the case there. Every word coming out of their mouths is something about religion, and most of it is just a joke.

It certainly explains their offense in the final years of the Tuberville era. (Florida note: Damn you to hell, Brandon Cox.)