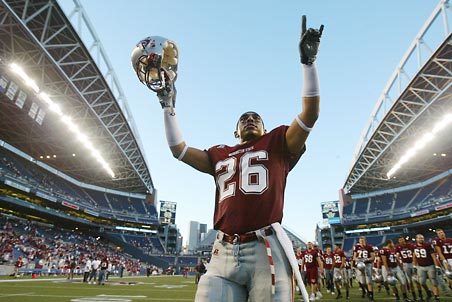 Finish the drill, Maurice Neal. Okay, Coach. No matter who tells you to stop, okay? Got it coach. I mean no one's stopping you, okay? Not even a cop with a loaded gun can keep you from making the play, right? Oh, you got no idea, coach.

From the Deseret News:

Police officers watched Neal hit a man, Martin Chacon, in the face, who then fell to the ground unconscious, according to the charges. Neal and several others then began to fight another man, Juan Hernandez, who fell to the ground. Neal then kicked Hernandez several times in the torso and head so that he lost consciousness, the charges state.

For continuing to beat people senseless despite being in the presence of a policeman finishing the drill, Neal receives two misdemeanor counts of assault and one count of failing to obey the orders of a law officer. In another interesting facet of the story, you can beat people up in front of policemen in Utah and only get a misdemeanor charge. Remember that--it could be useful one day if you're in the mood for brawlin' in Provo. (No caffeine or alcohol? Best belee we gone brawl.)

Total charge: Four points. Three for the charges, and one for doing it in front of a cop.

Xavier Hicks of Washington State has to be approaching some kind of new career Fulmer Cup record, recording points for the Cougars in 2005 (theft), 2007 (theft again), 2008 (assault via contact lens,)and now in 2009 for driving with a suspended license. Hicks did this last year, too, but that time he was on the way home from jail. Legends like Hicks don't need licenses, but they do get arrested for not having them while driving.

Two points for Washington State: one for the misdemeanor, and one because it was the most consistent performer in the history of the Fulmer Cup.