UPDATES FROM SOMEWHERE IN THE MIDDLE EAST

Share All sharing options for: UPDATES FROM SOMEWHERE IN THE MIDDLE EAST

Ohio State fans, do you not appreciate fine folk-rock sung to you and especially you by the stunning Teutonic tunesmith/coaching genius/attorney-at-law Rick Neuheisel? (If you feel you've been injured in an accident involving the hire of a coach, call Rick Neuheisel. He may be both the cause and solution of your problems!)

Jim and about 5 other coaches are on a morale tour visiting troops overseas. The gym was almost all Ohio State fans, it was hilarious. The UCLA coach came in first and started to talk to the OSU "side". Tressel walked in and the whole place just ignored UCLA and started chanting OH-IO.....it was awesome. 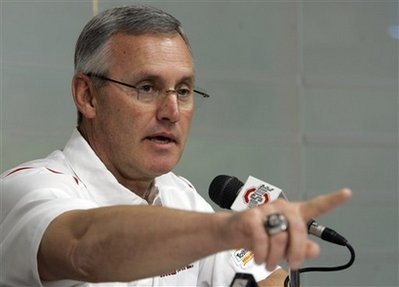 Suck it Neuheisel. This room is for rock and rock only.

And then we put on some Nickelback and did shrugs and it OWNED YOU MICHIGAN PUSSIES. O-H! I-O! O-H! I-O! (Repeat 387,000 times.) If he had been there Rich Rodriguez would have attempted to get a "Go Blue!" cheer going, failed, and then insisted he didn't have the personnel needed to properly execute the cheer.

Tressel and Neuheisel are joining this year's version of the Middle East USO tour, so in all sincerity good for them. The two are joined by Tommy Tuberville (nothing else to do,) Mack Brown (scouring the world for votes,) Troy Calhoun of Air Force (who might see some of his old players while he's there,) Jim Grobe (um...Jim Grobe, everyone!) and Houston Nutt, who signed 80 promising recruits to scholarships on the trip and will be very angry when he hears about what happened while he was out of town. GIGGITAH-libangonnagettheyasskicked.