We are all now one step closer to Florida winning its first Fulmer Cup in the first year without its actual namesake coaching in the SEC. Florida corner Janoris Jenkins loves his chain for the same reason you love your ostentatious and garish gold chain. You know, the dookie roll you're currently rocking in your desk jobs around the nation, and which no serious professional is without. 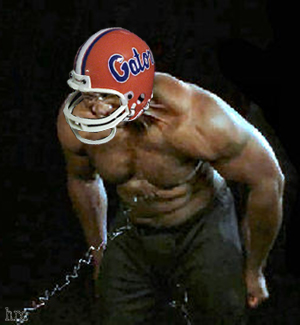 An artist's sketch suggests this was how Janoris Jenkins spent at least part of Saturday night.

Someone--most likely a "hater", as defined under Florida judicial code 34.2.882.43--decided to appropriate Jenkins' chain without his permission. Haters do this quite often, both because they are jealous of your immense, uncountable wealth, but also because they often make bad decisions because of sleep deprivation. Losing sleep thinking about your constant success with women, your constantly new and fresh clothing, and your stunning ride and its candy paint will dull a person's ability to choose wisely, but it's not your fault. One rule about haters as defined under criminal law is that they are in a constant state of hating, and will "be hatin'" 24 hours a day, 7 days a week. There's nothing you can do but keep shinin'.

Or you could try to chase them down, ignore requests from police orders, and get tased by the tasing'est cops in all of Christendom, the Gainesville police department.

The officer then drew out a Taser and told the group stop. At that point, Jenkins hit another person in the head, police reported...Jenkins was hit with one cycle from the Taser, but afterward he stood up and ran away...Police said Jenkins admitted he was fighting with the others because he thought they were trying to steal his chain, according to the report.

Jenkins, one of Florida's starting corners, earns three points in the Fulmer Cup for the two misdemeanor charges (affray, resisting arrest) and one bonus point for being a dumbass while on scholarship at our alma mater. We're this close to appropriating the U gesture for ourselves, and lack only a solid cocaine-based arrest to fully dethroning the U of the 1990s as Thug U. Rick Reilly should be recycling that old line from his piece on Oklahoma any day now.