Huzzah! It is here: 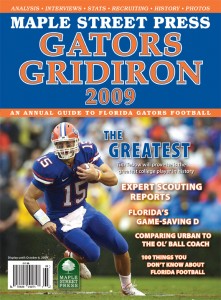 Pre-order your Maple Street Press Guide devoted exclusively to the Gators now now now, consumers, and be guaranteed a hot handful of 130 pages of nothing but the finest Times New Roman dedicated exclusively to the Florida Gators. It took a nation of millions to hold back our disorganization and procrastination, but fortunately we got the best. The cast of characters includes Chris Brown from Smart Football--ooh, it's coach porn like you wouldn't believe--, Dan Shanoff, Holly Anderson (herself!), Joel Hollingsworth, T. Kyle King, Scott Reid and Ryan Ferguson from Orange and Blue Hue, and yours truly as editor and hack-in-chief of this production.

It's been a massive production aided and assisted by two weeks sitting on our ass popping pills and procrastinating with Team Fortress Two, so it must be good. Those eight pages we wrote on Urban's post-2006 championship leather jacket are among the best opioid-fueled prose since DeQuincey's Confessions of an English Opium Eater--trust us! We wouldn't lie to you for a little bit money. this kind of elegant analysis is why we asked Chris to write for the guide.)