FULMER CUPDATE: AND THE STREETS OF CLEMSON ARE SAFE TONIGHT

Share All sharing options for: FULMER CUPDATE: AND THE STREETS OF CLEMSON ARE SAFE TONIGHT 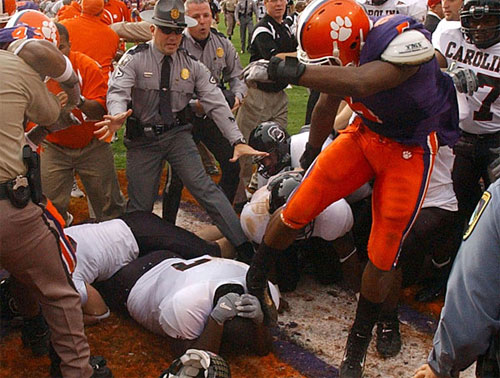 Clemson has a long and storied tradition of football excellence. This is not about any of it, and neither is the following story.

Fear not, fair citizens of Clemson. The scourge of drunk scooter driving has been eradicated for the moment thanks to the diligent work of local police and the blind stupidity of starting center Barry Humphries, arrested for a drunk driving charge on May 2nd when he was picked up at 4:59 a.m. by police. Even Dabo Swinney knows this is funny--um, yes, deadly serious:

Even though he was on a motor scooter, we take this charge seriously.

Of course you do: that's why you suspended him two games, even if you were giggling when you did it. By the way, 4:59 is hellaciously late by anyone's standards, and a time when unless you are waking up to lift weights and milk cows (or lift cows and milk weights, if you're a real badass.) If you doubt this, consult the Swindle Nightlife Gazetteer's "Hours/Activities Chart:"

Peak bargame performance/BAC balance (you may win houses or whole people in dart games.) Hand is confidently and suggestively low on the exposed hip of a woman with what you perceive to be a prize-winning ass. You're thinking about commiting a crime and getting away with it.

2:00--3:00 a.m. Frenzied convulsions no longer bearing any resemblance to dance. Mild DUI. Throwing shuffleboard widgets several feet off board/missing billard balls. Telling women "I'm the Vagina Monologue. I'll talk to yours and only yours all night." You're considering commiting arson and not even trying to cover it up.

3:00--4:00 a.m. Now humping support beams in basement dance hall. Would commit DUI if you could find your car. Now outside of bar after throwing a dart into a woman's left calf. Incapable of anything but groping at random women and pointing to crotch while reciting trusted pickup line, "BLEARGHTHGDKGHGAAAhhhh." Now conveniently precharged with drunk in public and aggravated rape (of your liver.)

Attention: Barry Humphries will not be suspended from his work as the lovable and wacky Dame Edna, as Dabo Swinney understands just how much his work means to the people of Australia and beyond.