FULMER CUP: THE BIG BOARD RETURNS

Share All sharing options for: FULMER CUP: THE BIG BOARD RETURNS

After a prolonged absence, the Big Board returns, courtesy of boardmaster Brian. Who is hung. Like Reggie. Fucking. Nelson. 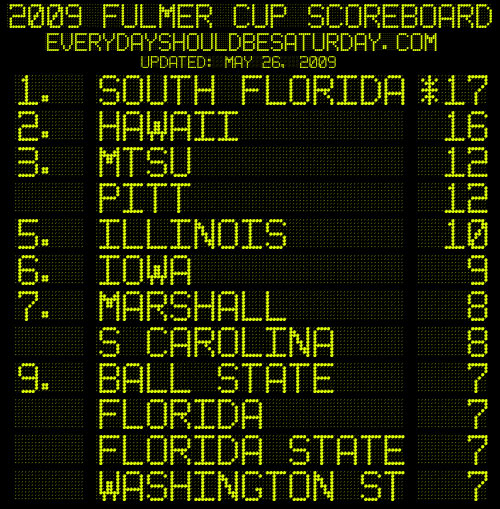 MTSU: 12 points awarded for multiple felony charges. Unless MTSU does something else fairly serious, they're likely not a serious player even with this bushelful of points thanks to this being the work of one diligent dumbass, and thus fall into Ellis T. Jones territory.

UL-Lafayette: 7 points awarded for burglary. Remember, it's bur-glar-REE, with an accent on the end and two e's. No bonus points awarded despite theft of precious XBox 360, a.k.a. a temporary cripple's best friend.

Oklahoma: gets another point for ticket nonsense.

Syracuse: 4 points for burglary, though we almost gave a damning extra credit point for stealing someone's XBox 360, you shitbag. (Thank god for the Orange Box. Orson_Swindle on TF2. I heart 2Fort.)

No points are awarded for Richard Goodman turning himself in re: the November brawl at the Campus Union, though we're all still very impressed with your ability to hit girls in the face with thrown chairs. The brawl happened during the season, and is thus outside of the Fulmer Cup's jurisdiction. Also no points for Marshall for this, though there's more to discuss on that in a bit