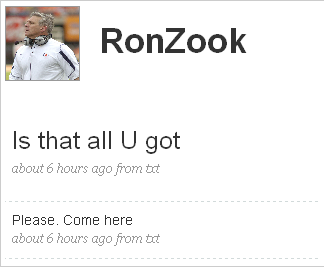 This lapse in twitter protocol could be the result of several things. Since most of you are not accomplished [REDACTED]ologists like ourselves, we'll give you the rundown of what might be prompting America's Most Perpetually Improving Coach to tweet incomprehensible, undirected gibberish at 4 in the morning on a weekend.

--Addressing his own reflection in a snack machine in the mirror, then daring it to fight.

--Saw the FailWhale, and naturally assumed it was taunting him; then, gave it the talkin'-to it deserved.

--Left out "@Solitaire" from the message. Was frustrated at the computer's refusal to give him any threes, or to even recognize the words "Go Fish" no matter how loud he yelled them.

--Was attempting to address the spirit of Sylvester Croom, who visited him clad in rags and chains and warned him he would be visited later that night by the ghosts of the 387 first-half timeouts he has left unused in his coaching career. (What do you mean Croom's not dead? He's in St. Louis, and that's close enough for us.)

This would all be less funny if you did not read the ensuing tweet, posted today.

Corrine Brown, your terminology is infurctious. Gradulations to your daughter, corch. It truly is a spurcial day for you and yours.