DO YOU NEED A PILLOW, COACH RICHT?

Share All sharing options for: DO YOU NEED A PILLOW, COACH RICHT?

Please, Coach Richt. Sit down. Would you like a pillow? You would? That couch is awfully firm, I know. Yes, it probably would hurt your back if you slept on it. Ouch! What sleep number are you? A 27, you say? They go that high? Wow. You are a man of refined and delicate tastes, sir! 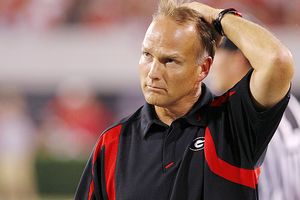 So I'm here to discuss the Florida Georgia game with you. That game in Jacksonville, yes. So you want it moved? Right? Because it's...hot. Oh, you mean in this room, too? Yes, it's somewhere around 75 degrees in here. You require an exact temperature of 74 degrees in order to not wilt? Really? Well, sure I guess we can do something about that. There, adjusted it for you. Gonna make it? Sure?

Okay! Let's talk. You want to move the game to Atlanta because it's hotter in Jacksonville, and because going to Jacksonville isn't really playing at a neutral spot.

Right. Does that mean Georgia might win with a greater frequency than once every six years if you move it to the Georgia Dome--

The tea? Too...what? Warm? Yes? It burned your mouth? Would you like--

Water with lemon. Of course. No ice, right? Somehow I knew that would be the case.

So somehow moving the game from a place where the entire stadium is divided evenly, and both teams regularly fill their allotment of seats in perfect balance, and then play a game in extremely pleasant conditions in front of said balanced crowd after both teams spend a night in a hotel before the game, that this has something to do with losing 16 of 19 games since 1990 in this rivalry...even after your university ran through similar nasty streaks in similar fashion in the year leading up to this reversal?

That somehow, after 75 years of competition, this arrangement suddenly became a problem in 1990? Like this is the product of some kind of Wilson Phillips "Hold On"-influenced curse? Like, pre-1990, no problem, we're rolling along nicely, and then BAM OH SHIT THE TOP SONG OF 1990 WE'RE DOOMED--

I know, you love that song. It's inspirational. I sing it when things get hard, too. But if you're telling me that pre-Wilson Phillips=Jacksonville RULZ, and post-Wilson Phillips Jacksonville KILLZ BULLDAWGZ DED, I'll be happy to believe it, because nothing else explains it. Ray Goff can't quite be blamed for the whole thing. Neither can Jim Donnan. You know what you're doing and even you still can't win with any consistency in this series--and you were the one propping FSU up in the late 90s while Bowden began to rust through his floorboards. So I know what you're going to have to do.

The sandwiches too spicy? They're just cucumber and white bread with a bit of mustard, but--why, yes, Coach. I imagine mustard is too spicy for some people.

Anyway, you may be a Christian, and that's great. Because you're going to have to kill Wilson Phillips, Coach Richt. All of them. I know, not doing that is part of the charter ten. Desperate times call for desperate measures. I know they all live somewhere in California. If you're looking for the big one, she'll be sitting by the Grand Canyon behind a piano. I'm fairly certain she's chained to it at all times. Otherwise, move the game to Athens on an away and away series for Florida if you like, for all Florida cares. As long as Wilson Phillips breathes in the third rate concert halls of this nation, you stand no chance to break free break free from the chaaaaaaiiiin.