PLAYOFFS VERSUS THE BCS VERSUS HOLI

Share All sharing options for: PLAYOFFS VERSUS THE BCS VERSUS HOLI 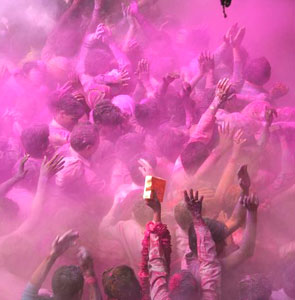 College football could use more throwing of colored powder.

From the estimable JCCW, discussing our playoffs vs BCS on-off discussion:

But Orson (here at least) also makes the common mistake of restricting the argument to one game vs. five, to a full-on "bracket" vs. the meteor-impact of a BCS one-off.

No such mistake made, but perhaps a clarification due: we think this dynamic applies to any and all playoff scenarios. We're on record as being pure playoff agnostics, or perhaps more accurately: we're pure playoff mysterians, and have no clearly defined preference on what the hell the resolution to college football's endgame would be. More specifically, we're discussing the effect of any playoff system versus what we have here. One thing for certain is the tradeoff between fairness and spectacle: even a plus-one format will diminish the championship game's bang-for-buckage, and will do so in ever-increasing degrees with the addition of more rounds and more teams.

The plus-one would be fine with us, but the truth with all playoff miracle cures is that they are all unfair and flawed in some way, and you just have to choose what variety of screwed-up you would like. The downside to having a playoff would be getting the CFB equivalent of the 2007 NY Giants in the title game, a team that catches fire towards the end of the season and doesn't put together a solid body of work before snatching the title game away from a team that has been more consistent than them for the entire season. (That wincing noise you hear is us standing on the same side of the fence with Bostonian sports fans. We feel so dirty, and not in that fun sexual way, either.)

The NFL has the benefit of a fascist dictatorship running it to make it hum. College football is more like a freewheeling, anarchic Indian festival of a sport where just holding an election is difficult enough, much less deciding who's going to run the place. We don't want to bend over backwards to defend the BCS, but to deny that it's been a reasonably effective way of solving the question "Quien es mas macho?" in college football would be disingenuous on our part...just as suggesting that having sportswriters' votes decide anything about the outcome of a sport is just, fair, or even logical.