PAULUS' MOVE IS NOT NEW, AND MAY NOT BE WHAT HE EXPECTS

Share All sharing options for: PAULUS' MOVE IS NOT NEW, AND MAY NOT BE WHAT HE EXPECTS

AP--HOUSTON, TEXAS. Greg Paulus' move to football from basketball may not be all it's cracked up to be, says someone who should know. 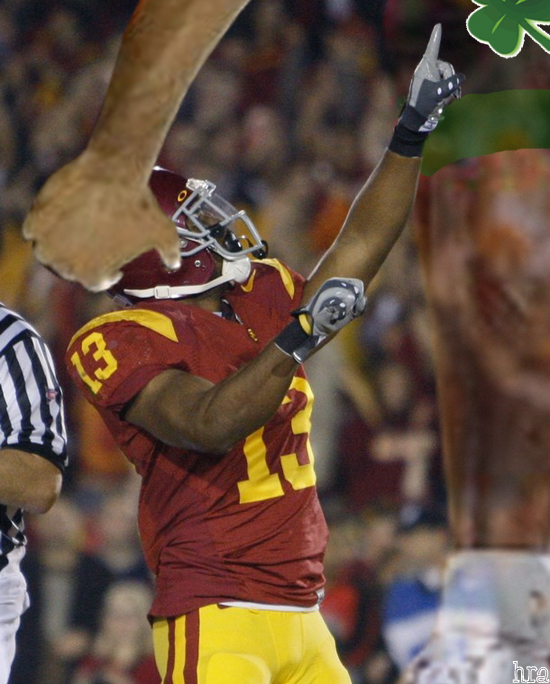 The kneebrace limits his movement, but even now Dikembe Mutombo can feel the rush of tiny feet beneath him scoring touchdown after touchdown as he backpedals across his living room.

"I WISH HIM LUCK, BUT TO PLAY FOOTBALL IS SOOOOO HARD," said Mutombo through a translator.

Disenchanted with the NBA, Mutombo received a waiver from the NCAA in 2003 to play defensive back for Ty Willingham at Notre Dame, using his final year of eligibility the Congolese center had left from his time at Georgetown to attend graduate school at Notre Dame.

Graduate school allowed him to try something a friend of his suggested mere months before.

"I'd heard so much about him, and when he walked in, I thought 'That's what we need! A shot blocker to swat down some of those jump balls USC's always throwing!'" says Regis Philbin, the television host and Notre Dame alum who met Mutombo at a charity function. "I was joking at first, but he couldn't be stopped."

"REGIS PLANTED THE SEED, AND I MAKE IT HAPPEN ROAAARRGGHHHH," said Mutombo, glancing over at the green number five jersey framed on his wall. "HAMMER GURG PLAY WINFIGHTER."

"We thought the idea was an excellent one. Bringing him into the game in goal line situations was an excellent concept we came up with, in so much that putting him against USC's receivers was going to be part of the process of making this team better, and that's what we thought would work at the time and give us an excellent chance of winning. That is what our coaches decided at the time to the best of our capabilities. Am I doing this interview like I'm about to be fired? I am, right? I'm sorry. It's habit."

In that game, Mutombo entered the game once USC reached the 17 yard line on the second play of the game. Then the grand experiment began to sour in front of thousands of horrified Irish eyes.

"We just threw under him," said quarterback Carson Palmer in a phone interview. "He kept wagging his finger, and every time he did we just threw slow, lazy passes underneath him."

Palmer finished the game with 638 yards passing and 14 TDs, all thrown at, around, and more often than not under Mutombo. Palmer had to pause several times during the interview to compose himself in between fits of laughter.

"By the end of the game the receivers were jumping off his shins and catching balls on the carom off his toes. The only drawback was having to change my compression shorts from sharting myself laughing in the third quarter when he stumbled, fell into the stands, and crushed a tuba player."

Even today at the end of a very successful NBA career, Mutombo winces at the memory.

"IN LIFE MUTOMBO HAS NOT TASTED DEFEAT OR SHAME RORAAHRHRHHGHHHORAAAGUORAAGGRHHH. THIS MEMORY BURNS MUTOMBO LIKE A KINCHASA WOMAN OF PLEASURE BURNS HER CUSTOMERS. FISHCLANK URAANGA LUIS SCOLAMART."