Share All sharing options for: KENNY STABLER LAUGHS AT YOU, SAM KELLER 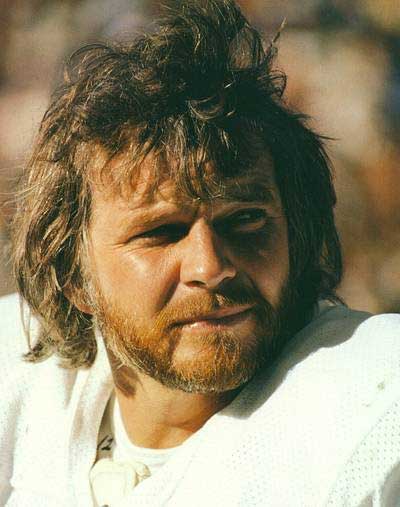 Congratulations. This picture of Ken Stabler just installed a nitrous boost in your car and felt up your wife. You'll thank him for both.

We missed this, buried as we are by our mountain of extracurricular work this week, but it should be mentioned that Kenny Stabler laughs at you, Sam Keller. From Warren Beatty's upcoming memoir My Cock: A Memoir.*

We were all at the Chateau Marmont when Angelica and Jack walk in, and wow--that woman was a pharaoh's joyride if ever there was one. Long, sleek, the kind of woman who'd choke you until you passed out, sure, but you'd wake up covered in her and two of her friends fired up on lust, cocaine, and the knowledge she'd make it happen with a bullwhip and a cocaine spoon if she had to. Not that she ever had to.

Anyway, Kenny Stabler is working the bar. The Snake walks over, takes a bottle of 151, and swigs a whole mouthful of it while snatching the cigar right out of Jack's mouth. He then blows the 151 in a fiery stream all over Anjelica. Right at her! Suddenly the smoke clears, and she's standing there unburned, totally naked, and just stunning.

The Snake took her to the endzone right there at the bar, and Jack was screaming "GO, BABY, GO!" the whole time.

Have I mentioned I can't feel my dick?

An amazing true story about a man who makes Sam Keller's mere bar trickery look like the amateurish trifling of a schoolboy, which it is in comparison. Stabler had a video game company use his likeness illegally in a video game once, too, but you don't see him suing the makers of Metal Gear for basing Solid Snake on him, do you?

*This book does not exist, and this story did not happen. But it could have, if Stabler had wanted it to and he wasn't too busy killing the ladies at the Oakland Yacht Club with his short shorts and assmagnet of a Trans-Am.