BETWEEN THE HEDGES GETS AN ENTIRELY NEW MEANING

Share All sharing options for: BETWEEN THE HEDGES GETS AN ENTIRELY NEW MEANING 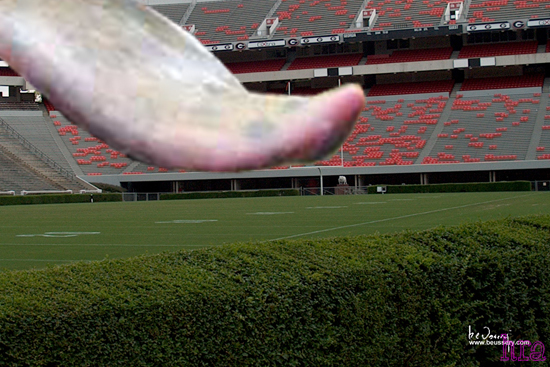 Ladies and gentlemen, leave it to Dan Savage to turn even the twisted mind of Lewis Grizzard on its end:

I recently visited the University of Georgia in Athens, where the kids asked me to come up with a dirty meaning for "between the hedges," which is their football stadium’s nickname. Off the top of my head, I said, "The boy in a girl-boy-girl three-way could be described as being between the hedges." But upon further reflection, I think the term is a better description of going down on a woman with a particularly hairy bush—and the tongue, not the boy/girl doing the tonguing, is "between the hedges."

Lewis would approve, if his marital history is any indication of his fondness for going between the hedges. (Or perhaps not, actually. Refusing to play home games between the hedges could shorten a marriage by a considerable margin.) Looking around the rest of college football, there's certainly promising territory.

Death Valley. If an LSU fan hasn't already called her vagina this, we'll eat a bowl of driveway gravel, because you know "scoring in Death Valley" is low-hanging fruit for the degenerate minds of LSU fans.

The Swamp. Too easy.

The Shoe. Kind of a rugged endearment for it, but sure.