Share All sharing options for: FOOTBALL AS LIFE: CAREER READS 101

Football is like life: it has a playbook, and when it breaks down, people get hurt. The first installment of this series appeared here as "Football Analogizing;" it appears here under a slimmer title.

Reads are important on this play, which we'll call CAREER JET BANDIT X FLY D-BO OVER 2. We're expecting good protection through a solid zone scheme of a middle class upbringing and lack of obvious physical or mental defect. We're running four routes on the play. You'll note the slot receiver is not accounted for in the playbook; this is by design, since you need one career option to forget, and then mourn as your lost ideal once it's too late to choose it in the progression.

Let's go through the reads, son.

First read: ASTRONAUT. The quarterback (you) takes the ball in the shotgun and surveys the defense. On this play, your first option is the X receiver, on this play known as ASTRONAUT. 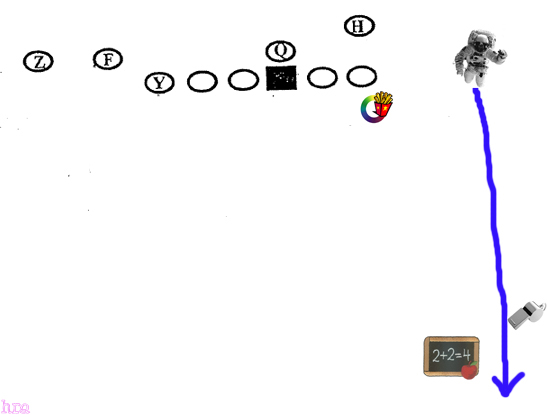 ASTRONAUT is double covered by LACK OF MATH SKILLS AND DISCIPLINE. (Also, you find out you don't like enclosed places when you go to Mammoth Cave as a nine year old.) It's important to recognize this early and not force this ball prematurely, as you may end up in the military not flying jets, but instead handing out fresh underwear for hours at a time to new recruits as a logistics man.

This throw is off the table, especially with a potential tip from COLORBLIND pressuring from the weakside. You must go to your next option.

(COLORBLIND plays havoc on his play as the 3-4 hybrid end: you can't tell if he's dropping to further cover ASTRONAUT, or rushing the qb. He's a menace confusing the entire left side of the play for the qb. Better to let the running back chip and then go to the flat as an outlet receiver, which we'll cover here in a bit.)

Second read: Your Z receiver, a.k.a. The Z receiver is referred to here as ADULT FILM STAR. 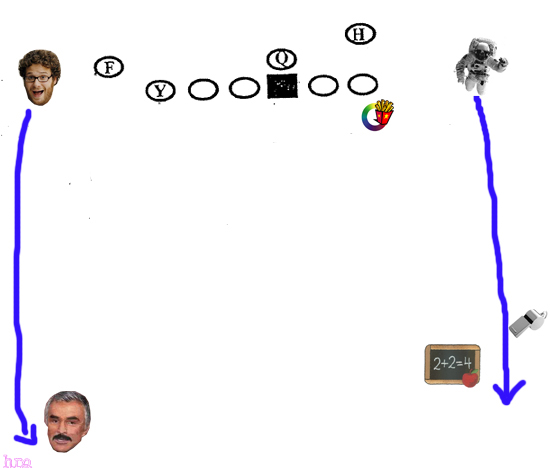 Third read: The Y receiver, or the Tight End, or what we call VET in this scheme. Shifting your feet a third time somewhere around your first semester in college, you eye your third read: VET. It says math is required in the major description, but you don't believe it, because they're just animals, right? And animals can't hire lawyers or complain when your ignorance of basic chemistry puts them in a three day coma. How hard can this be? 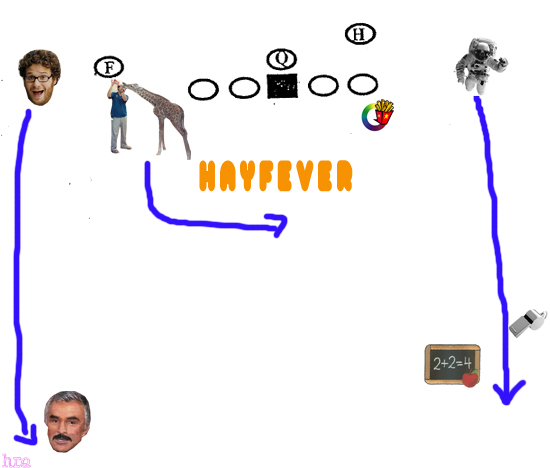 Unfortunately, VET is running a short drag round underneath the ROBBER position of HAYFEVER. This throw is also affected by LACK OF MATH SKILLS AND DISCIPLINE, a corner whose locktight coverage indeed affects the entire field. (A good corner is just that valuable to a sound defensive scheme.) It might look open, but it's not, and a forced throw risks a turnover and valuable time lost to getting all those prerequisites only to find out you don't savor the special warmth you feel with your arm stuck two feet into a cow's rectum.

You move to your fourth read, who because of the double coverage on ASTRONAUT should be wide open: the running back, shown here in our terminology as CELEBRITY CHEF. 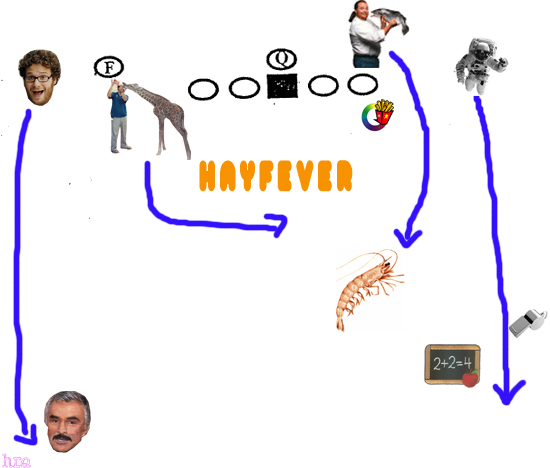 This option is interrupted both by your lack of any real restaurant experience and THE SHRIMP INCIDENT. This option is blocked, and if you should force this throw twice you will have to rely once again on the kindness of strangers with EpiPens to spare.

The net result on the play will be an incomplete pass, and a PUNT 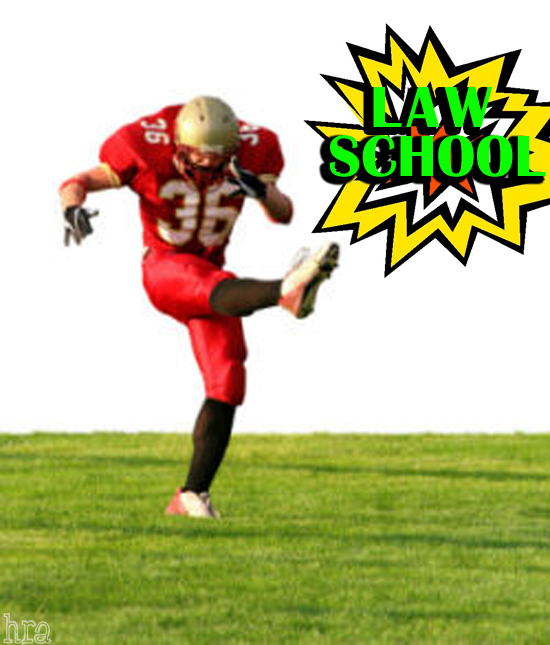 There are a few more loaded up and ready to go here, but if you have a situation you'd like to see metaphorically represented in football terms, please send it to us at harumphharumph of the gmail or yahoo variety type email address.