Share All sharing options for: EDSBS: ENEMIES OF THE STATE 2009

Orson: Enemies of the State---EDSBS needs them for 2009. We will split the votes for Lane Kiffin and Urban between the two of us and run for common foes, okay?

Holly: I was just thinking about this the other day---with Nate Longshore and JPW gone, I need new punching bags. I assume we are taking Crompton and Bill Stewart in some sort of special category reserved for me. Like a playpen.

Orson: Of course. It'll work like Federal versus State here. You're a state.

Holly Anderson: I'm a commonwealth, beetch. First nominee: Bob Davie for crimes against the English language.
Exhibit A: "Will Muskamp."

Orson: Actually, I've come to like the word "FOOTBAW"

Holly: Let that be his legacy. After he's dead. Because we killt him. Number two: Petrino.

Arkanas must not be allowed to develop legitimate football weapons, because it would upset the balance of power and disturb far more entertaining teams such as LSU.

Orson: Agreed. The SEC West is where the talented yahoos of coaching go to get their wildman on. There's already an obsessive taskmaster there. Enemy of the State: the Rose Bowl, or Jim Delany. He's really like the talking end of the Slither monster that is the Rose Bowl.

Holly: Steed Lobotzke, for rejecting our overtures of friendship. WE JUST WANTED TO KNOW A GUY NAMED STEED
BUT THEN WE LOVED YOU FOR YOU

Holly: Toyota---unless Saved By Zero is over.

Orson: Think that's over. Or should we say: we HOPE that's over. Toyota should get it anyway, as we blame them for the death of the beloved American car industry, which took away our rolling cancer deathtraps and replaced them with depressingly reliable and stylish "functional" cars.

Orson: Yes. Not an earworm so much as an earsnake that raped you and didn't even call afterwards. Also, we should pre-emptively declare war on Firefly Vodka. 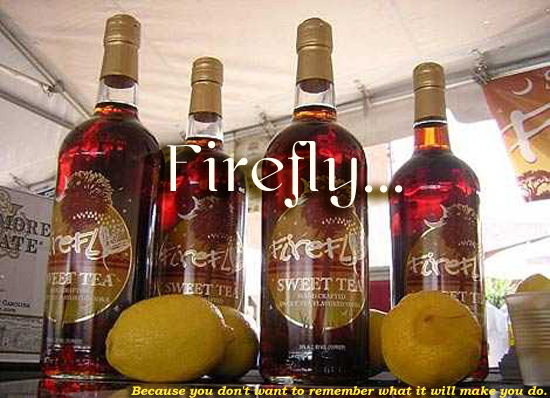 Holly: It loves us and wants us to be happy.

Orson: It's the Beast with a Million Backs from Futurama. You will love the sugary tentacle.

Holly: But what a way to go!

Holly: This is where I cuddle up to my bottle and reassure it that I will only fight if it wants me to.

Orson: You won't even see it creep in: only its aftereffects will make it clear what's happened here. The high-school girl passed out with her pants off in the corner; the unregistered handgun on the desk, smelling faintly of freshly discharged shells; the food in the sink, clearly leftover from a drunken meals devoured over the drain; the tiger. It will all make sense when you feel the pinch of the halo headache and see the empty, innocent looking bottle of Firefly on the floor, as damning a piece of evidence as a dead body on the floor with a polaroid of you killing said person stapled to its shirt.

Holly: [guzzles Firefly, continues] Can we have one enemy for absolutely no reason? Someone harmless, like Dabo Swinney. Why, you ask? Because FUCK CLEMSON (year 2!), that's why.

Orson: My enemy for no reason will be the 12 o'clock kick against an SEC West team. Nothing good ever happens to Florida in those games. Ever.

Holly: Also, the west coast ABC affiliate that at least once a year will show That's So Raven instead of the morning game.

Orson: Oh, burn that motherfucker to the ground. That's savagery.

Holly: I demand reparations for that shit.

Orson: Granted. We also need a perfectly innocent player to blame for everything. Unfairly, of course. Call it the Chris Leak slot.

Holly Anderson: Who's Willy Korn's competition? We hate him, by virtue of NOT BEING WILLY KORN (willy korn)

Orson: Actually, just Auburn, period. Take a year on the rack, Dread Pirate Roberts. If we can't beat you, we'll point and laugh (and lose by a field goal to you in two years GODDAMMIT WHYYYYYYY.)

Orson: We also declare the song "Click Click Boom" to be an enemy of the state. You can set a Youtube highlights video to something else. It won't break the internet. For example, you could follow these gentlemen's lead and pick this song, which is far better than "Click Click Boom" ever was. (Audio NSFW.)

Orson: We haven't picked a team that we want all the bad things in life to happen to, but it should be obvious. First, by definition, Florida State; second, because we can't beat them, Auburn.

Holly: With Chizik at the helm it'll go bad hilariously. We should support the going.

Orson: While you're heading toward the tree at 105 miles an hour with Chizik hammering the throttle down, let us press the button for the nitrous for you.

Holly: We will be that for you, Auburn. Because we care.

Orson: Also, new snack food to hate: Late Night Doritos, because I suspect YOU'RE JUST REGULAR DORITOS WITH PAPRIKA AND A NEW BAG.