Share All sharing options for: FULMER CUPDATE: THE LONG DELAYED BIG BOARD

The big board arrives, albeit with signficant marginal errors, we're sure. Still, it comes free from the boardkeeper Brian, who as always is endowed to a degree one might call Reggie Nelson-esque. 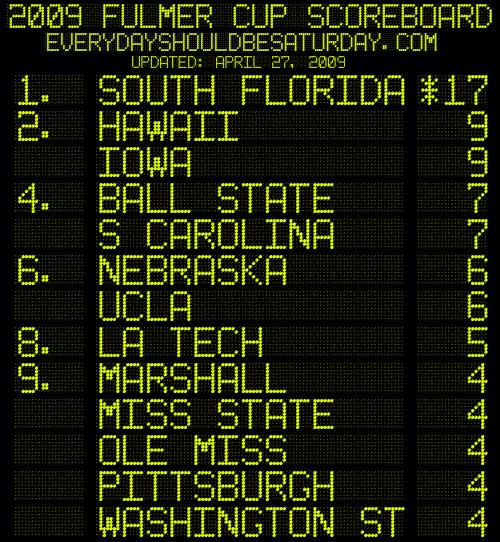 South Florida is ETJ3'd. Please spot the big asterisk noting an exceptional case with conditions and provisos attached: South Florida's score dwarfs the available competition by a wide margin. Cue FAILhorns, though: Puppello's substantial points are unabetted by a teammate, a situation disqualifying the score from consideration for the championship by itself. He is, however, the clear leader for the Ellis T. Jones Award, a title he's likely locked up (unless someone takes the challenge and pistolwhips four or more people in a single flurry. With the departure of Ronnie Wilson from Florida last year, that's not likely to happen.)

Correction: Florida State should be on the board with six points total after the arrest of Rod Owens, who celebrated his big spring game by getting hammered and toodling aroundTally, a privilege you may engage in if you're willing to pay the Mr. Toad's Wild Ride fun price of a DUI charge.

Further fairness, Further Correction: Just to keep up, Florida enters the fray with a five point performance from walk-on junior running back Marquis Hannah. Hannah earned a felony unarmed burglary charge and a misdemeanor battery charge for something that really, really ended up sucking for some poor dude in a dark apartment:

"Hey, what's going on I--BLAAAAOOOOWWW." The bonus point (home team, right?) gets us to five points. Urban Meyer had no comment other than to say he thought his eventual punishment of Marquis Hannah would be "harsh."

It's Ames. Iowa State gets a point for public intox, but no one blames you, sir.

It is Ames, Iowa after dark, and what happens in Ames, stays in Ames, mostly because no one but Seneca Wallace has ever left.

Um, it's Pullman. Same for Pullman, where two Washington State players account for three points on combined DUI/suspended license charges. It's not their fault either, since Georgia has outsourced their expensive driving violations operation to the cash-strapped Cougars for the year. (Seems to be working.)

The People's Republic of Evanston wants to taek ur gunz. Air rifles are banned in Evanston, since power comes from their barrels, and every decade or so takes out a stupid child's eyeball. It's also why Jeff Radek of Northwestern earned one point for Northwestern for possession of an air rifle, a sure sign THE GOVERNMENT TAKEOVER IS BEGINNING!!! SAVE US JASON MCINTYRE!!!

It's water. Bacardi water. Marshall, underage drinking, and why no one uses rum bottles as water bottles after they're done with them. One small point for Marshall, a program that's toned down the festivities significantly in the post-Pruett era.

UConn may also pick up one point more for their team captain interfering with a police officer during a fight at an apartment complex during which officers recorded eight tackles, 4 sacks, and 2 TFL (tased fully and lovingly.)

Old shit, but......we award one point to Oklahoma for failure to show. We'd also put a INSERT TITLE GAME JOKE here, but we've been rewatching the title game, and that would be an inaccurate description of how close the Sooners came to winning that game. This should hurt more for Oklahoma fans, and that is by design. We're kind like that.

This should catch us up, but if not...drop them in the comments, please.