Last Thursday, we reported that Tim Tebow had been named the spokesperson for the conservative action group Concerned Parents Against the New "Tween" Dora the Explorer (CPANTDE). Tebow declined CPANTDE's invitation to be their spokesman, but did release a statement on the organization's behalf urging Dora's creators to give her a more modest wardrobe. We regret the error. 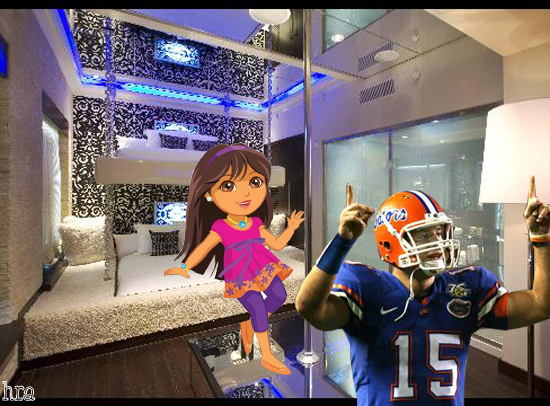 Everybody on your tummies!

In the Friday mini-post "Jock Makeovers," we reported the secondhand news that Matthew Stafford pronounced his hair "off-limits" to Russian tennis star Anna Kournikova. "Hair" should have read "ass," because the number one draft pick ain't lettin' anyone go two hole on him no matter how Moscow ghetto hot Miss Thing might be. Enrique might have been down with a trip to browntown, but Matt Stafford's nobody's finger puppet.

Friday's piece, "Better Know A Big XII Spiritual Meltdown", reported that Missouri's Jeremy Maclin had been found to be living in the Tigers' locker room after the conclusion of spring practices to escape the emotional rigors of the draft prep limelight. The stuffed rabbit Maclin was photographed clutching in his sleep, however, did not belong to him. It is a childhood treasure named Twinkles, on loan from a sympathetic strength coach. We regret the error.

In this week's "What's Your Coach Twittering?" feature, we attributed two messages to USC head coach Pete Carroll: "If there's one thing that gets me more excited than spring football, it's waiting for tickets for the new Cannibal Corpse tour to go on sale" and "Guess some old ladies don't appreciate being told 'rub some dirt on it' when you bump their Rascal scooter in the parking lot." In fact, these messages were Twittered by former South Carolina coach and current ESPN commentator Lou Holtz. We apologize to Carroll, Holtz, and Cannibal Corpse for the mixup.

Monday's Curious Index reported that a crackerjack research team at Duke University's renowned biology laboratory has discovered Blue Devils head coach David Cutcliffe's folksy chuckle can cure rheumatoid arthritis and osteoporosis in adult test subjects. This was based on preliminary data, and neglected to include later findings that Cutcliffe's laughter also was found to be an efficient means of pain management for lupus patients. We regret the error.

In our latest edition of The Week In Bowden Jurisprudence, we reported the arrest of Tommy Bowden for simple battery in a Birmingham Starbucks. Law enforcement personnel have since confirmed that Bowden was actually detained for loitering, after spending several fruitless hours wandering the store, coughing conspicuously and typing exaggeratedly on his BlackBerry in a vain attempt to be acknowledged by another human being. We regret the error.