Share All sharing options for: THE EDSBS RANDOM ELEMENT DRAFT (JUST AS MUCH SENSE AS THE NFL DRAFT)

Okay, since the NFL draft blows spiky cat dick, we're doing an EDSBS Random Element draft. This is where you get to pick a random element in any scene which improves it. For example? Well, standing on a midget's shoulders and wearing a long trenchcoat to make it look like you're one tall and very uncoordinated person, for example. This always makes a scene.

The order of the draft as chosen at random will be:

Please answer in this manner and chain the email around, lest we get out of order. Feel free to include media you feel would get your point across: video, audio, images, collages, papier-mache...whatever works for you.

There will be three rounds. Once an element has been chosen, it is off the board (as are its derivatives.)

Holly With the first pick of the EDSBS Random Element Draft, Holly selects a swarm of radio-controlled killer bees to do my team's bidding. Good for batting down errant passes as well as crowd control in the less civilized parts of the stands, this is the slam-dunk, can't miss, Manning pick of the draft. (Peyton, not Eli, because bees would never bitch out and get their daddy to demand a trade to a higher-profile market.) And lest we forget, as ever: "BEEEEEEEEEEEEEES!!" is immensely satisfying to say.

Oops Pow Surprise: Continuing on the animal theme, I think you have to look at Monkey With Gun at #2.

Chimps are monkeys because I fucking well say so. Other cute, living things you can imbue with lethal force without them having any sense of the consequences it entails are babies, the mentally challenged, and otters. Otters can shoot guns, right?

The Great Barstoolio: In this round I choose framed portraits with spy eyes. It's the sort of thing that allows me to permanently live in a Scooby-Doo world where even preppy chumps like Fred are actually pretty cool and drive party vans. It keeps party guests on edge, me in the know, and framed jerseys off my walls.

Doug Gillett: With the fourth overall pick in the Random Element Draft, Hey Jenny Slater Enterprises p.l.c. selects Phil Hartman. Yes, I know the dude's been dead for more than a decade, but goddamn, he made every single movie or show he was in, whether he was a central figure or just a ten-second cameo. "Saturday Night Live"? Funniest cast member ever; don't even act like the "Charlton Heston and Al Goldstein Record the Books-on-Tape Version of Madonna's 'Sex' Book" didn't bring tears to your eyes. "NewsRadio"? Totally flamed out after the off-screen death of Bill McNeal. "The Simpsons"? Was so good as Troy McClure that the writers wrote in additional parts for him. Even his short bit in "So I Married an Axe Murderer" as "Vicky" the Alcatraz tour guide still nearly makes me wet myself.

His desiccated corpse is funnier than 90% of the comedians out there today; prop his dead ass up on stage and Carlos Mencia would probably still steal jokes from him.

Orson: With the fifth overall pick in the draft, I select STUNTMAN ON FIRE. Stuntman on fire has captivated the EDSBS staff ever since his first appearance in the film "The Swamp Thing" where he crashed through a laboratory suspiciously loaded with whole sheets of glass and big, breakable beakers. Sadly, the scene ended with him falling into a swamp and thus extinguishing his distinctive flames. Hollywood ruins everything.

No scene is unimproved by the presence of STUNTMAN ON FIRE. Nobel Prize Speech? Better if it involved a man on fire. Christening ceremony? Needs more STUNTMAN ON FIRE. A tender moment of love-making with your significant other? All the hotter when a STUNTMAN ON FIRE flails his way around your room. 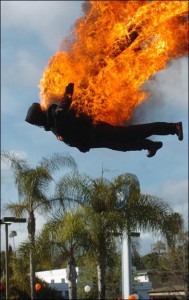 Holly: With the first pick of the second round, I select airbrushed critter t-shirts, available online at http://www.animalshirts.net/. 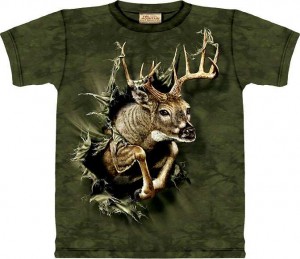 Because nothing says FIERCE FOREVER WINNING like a cartoon deer tearing its way through your ribcage ready to show the world what the fuck is what.

Oops Pow Surprise: With the 7th overall pick, the Tighty Whiteys select Guy Who's Getting Undressed When He Shouldn't. We're not huge fans of full frontal male nudity or anything, but the Chris Farley Chippendale's audition, Will Ferrell's Thong Patriot skit, and Randy Marsh's special brand of patriotism make ill-advised male sartorial dispensation a value pick in the 7th slot.

Barstoolio: With the 4th pick in the second round, I select a pair of diamond-encrusted footie pajamas. Because a) footie pajamas are awesome, and b) if I'm able to drop that kind of coin on sleepwear I can also afford to have an exact replica of the old orange Bowl rebuilt anywhere. Or five or six of them. Diamond footie pajamas would also have the effect of turning me into a human disco ball, and I defy you to imagine any scene that could not be improved with the addition of a disco ball.

Doug Gillett: With the ninth overall pick in the draft, I select: bacon. 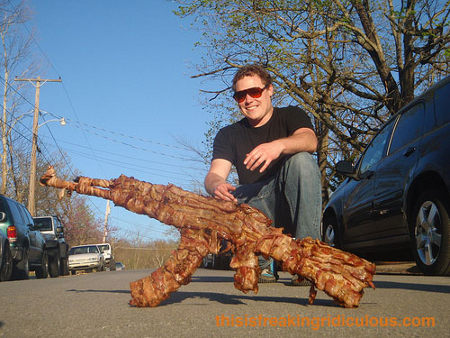 We've already established that it is a tangible improvement to every meal, from sandwiches and breakfasts to chocolate and other desserts (ask Holly about the recipe she found for cinnamon rolls with bacon rolled up inside them), but it also improves the smell of most things, and dammit, it just LOOKS good. Plate of scrambled eggs looks lonely all by itself, but drop some bacon on that plate and it's a MEAL, son. Marisa Miller in a bikini, hott; Marisa Miller in a bikini HOLDING A PLATE PILED HIGH WITH CRISPY BACON, even hotter, in ways that I'm not even sure I can fully verbalize. Like gold, Angelina Jolie, and the scent of the top of a baby's head, bacon's appeal is omnisexual, panglobal, universal.

Orson: At the ten spot I reach into the mid-majors to select a diamond in the rough: Play him off, keyboard cat.

Don't lie. If that just happened at random in the middle of the day you'd shit your pants so hard with laughter they'd fly off like they were spring-loaded khaki missiles.

Holly: Third round! For my final pick, I select the ability to make my head spin around 360 degrees when angered. Fuck invisibility and the hell with the power of human flight--here's a superpower that'll really drop some jaws. Also, great icebreaker at parties.

Oops Pow Surprise: Going back to the animal well one more time for the last pick: musical animal noises make anything hilarious.

Barstoolio: For their final pick, Team Barstoolio selects "Machete." Prop it in a corner, de-tail shrimp, or slice Jim Tressel's tits off in an abandoned mosquito-filled warehouse down by the river: whether for use or decor, every scene can be 97% more full of madcap tropical danger with a machete around.

Doug Gillett: For their third-round pick in the 2009 draft, Hey Jenny Slater Enterprises p.l.c. selects the last minute and fifty-eight seconds of The Police's hit 1981 single "Every Little Thing She Does Is Magic." Maybe a bit of a reach at #14, but this song was where The Police went from "three nice British guys with a bit of a reggae sound to them" to "oh my god, best pop band ever, PLEASE DON'T EVER BREAK UP." And if you have any faith whatsoever in the power of music to uplift the human spirit, the two-minute jam-out at the end of this song should have you bouncing around your living room, car, or wherever you happen to be listening. Otherwise, you have no soul and should go to work for AIG.

You don't know why they're fighting, who they're fighting, or even what all of those banners they're carrying say. You just know that they're on fire at the moment, and being trampled underfoot by riot police in Darth Vader masks going toe-to-to with tiny enraged 18 year old engineering students throwing 20 pound roof tiles off the roofs of their dorms at the cops. I cannot imagine something more memorable than a massive Korean Student Riot breaking out while you were, oh I don't know...getting a fresh cinnamon bun at IKEA, and then turning around to watch a demonstrator laugh as a riot cop pours pepper spray into his unflinching eyes.

Mel Kiper thinks Barstoolio clinched this with "Machete" in the third. Leave your own random event picks below.