WHY THE GAMEDAY RUMOR IS CRAP

Share All sharing options for: WHY THE GAMEDAY RUMOR IS CRAP

After some actual talking to our sources, the rumor of any changes to Gameday is mostly crap, with the only salient piece of information being the annual speculation over Lee Corso's retirement. This very well could happen, but that's the case every year when you're talking about a 73 year old man and his job--nothing's long-term, not his job, or his pants, or even finishing lunch without falling asleep or drifting into an improper reverie over a thick-thighed woman named Isabel who showed a young man the meaning of lust back in Biloxi in 1948. It's all up in the air at that age. 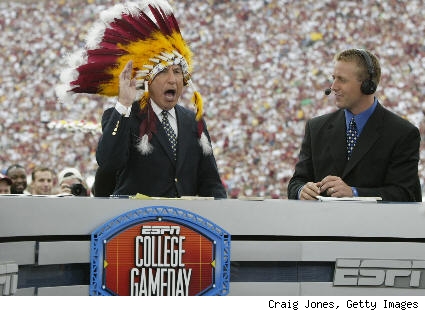 "And she would wear a headdress, and call me her naughty little paleface." "We're live, coach." "FAAAAAAHCK"

Besides that perpetually possible event, the rest of the rumor is crap. No sponsor has that kind of pull with a show, as for a sponsor demanding changes in the lineup of a successful program would set a dangerous example for future shows. ("Yes, we will sponsor your show, but you'll have to have the CEO as the color guy. He plays a lot of Madden!") Even in a recession economy, the puppeteering of a show by the sponsor is highly unlikely.

Additionally--besides an ESPN source saying flat-out "no" to the case--how on earth would Ravech cover college football when he's already booked for baseball, a sport that will keep him occupied deep into October? (That is when it ends, right? And someone walks out with the Shanley Cup? Halp?) Though ESPN likes to have their commentainers work across different sports, they also like to have their anchors work on sports while they're actually occurring. It's why they're winners, that ability to use a calendar, there.

Finally, even if Fowler, the admitted king of his discipline, decided not to do Gameday, the taciturn Ravech isn't the logical choice. That would be Rece Davis, a college football junkie already embedded with the college football staff with an obvious skill for running the point and keeping a nice loose chaos running at all times on air.

Again, this comes courtesy of actual real sources. We know, don't choke. It's psuedojournalism, and it happens twice a year here.