Texas A&M also had their spring game Saturday, fun for everyone as they decided to discard standard football scrimmage rules and instead play a basketball game in full pads. 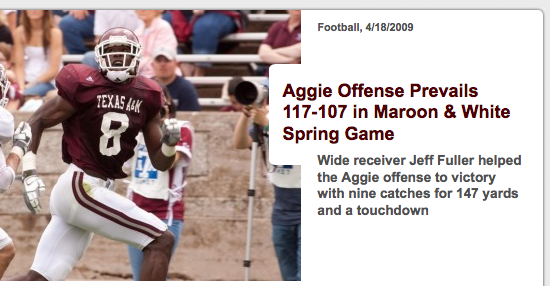 The odd score comes from the Rock 'n Jock scoring system used by the Aggies: big plays received more points than merely average plays, an elaborate system balancing the thirty point bucket suspended above the actual goal posts with points determined by die roll on the sideline by head coach Mike Sherman. White had a chance to tie the game with a fiftyleven point field goal, but the Maroon kicker slipped in his cleats on the dusty gravel of the parking lot and doinked his 236 yard attempt harmlessly into the windows of the Bright Football Complex. (Bill Bellamy would have been proud.)

The one thing you should note from the Aggie game: cover the hell out of Jeff Fuller. The wide receiver had 9 catches for 147 yards and a score. As with all intrasquad games, the takeaway lesson is twofold for an opponent scouting them: you either want to blanket him all day with coverage, or find out who was defending Fuller and throw at him until he breaks down in tears and runs off the field.