PEPPER THE NOTRE DAME COMEBACK DOLPHIN GETS A STALKER

Share All sharing options for: PEPPER THE NOTRE DAME COMEBACK DOLPHIN GETS A STALKER

Los Angeles. Charlie Weis, Pepper the Notre Dame Comeback Dolphin, and a random woman Pepper picked up in a bar in LA.

Charlie: You said you were going after a tight end. That was misleading.

Pepper: SHE'S GROWN INTO A RUNNING BACK! AH AH AH!

Charlie: Okay. I've gotta get out to Oaks Christian see another of the Montana kids. Jesus, there's like eight of them. Joe breeds like a brain-damaged rabbit with three dicks.

Woman: I've never slept with a dolphin before. Only a Saint. Ha! That's a joke!

Woman: You're mean! And right. Where are we going?

Pepper: TO MY HOTEL WHILE CHARLIE GOES TO RECRUIT. YOU BETTER PUT IN A BETTER PERFORMANCE FOR ME THAN YOU DID ON THAT VIDEO.

Weis: Just unacceptable, ma'am. I gotta grab my car from the valet. Wait, is that---

Woman: An Asian guy! With a taser!

A disco ball drops into the street suspended from cables. Music strikes up from unseen speakers. Norm Chow begins dance seductively toward Pepper. 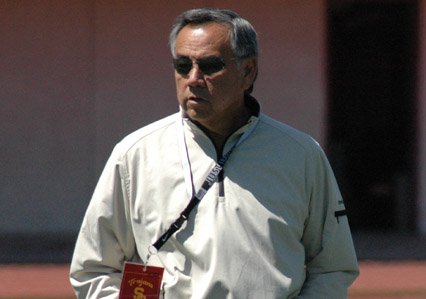 Pepper: CHARLIE RUN. YOU DON'T WANT TO HEAR THIS.

They run for a city block. Charlie Weis keeps up a shockingly good pace with his cane. They turn a corner, and...

Pepper: I HAVE RESTRAINING ORDERS, NORM.

Weis: So that's why he's never been a head coach.

Pepper: A FANTASY DOLPHIN STALKING FETISH WILL DO THAT TO YOUR CAREER, CHARLIE. RUN!

Woman: Oh god. This is grosser than the time I found out Reggie went to college.

Weis: Well, that depends on your definition of college, sweetie. They're looking into that now.