Share All sharing options for: TEXAS, YOUR 2008 BIG 12 SOUTH CHAMPIONS

WOO-WEEE! Nobody does championship asterisk like A TEXAS-SIZED CHAMPIONSHIP ASTERISK! 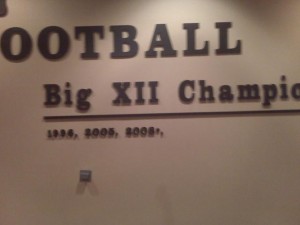 Shame is for losers and Sooners. (Click for beeg.)

Texas figured they don't put the shift-8 combo on the board for nothing, and went ahead and decided to claim the Big 12 South title since the Big 12, in all their wisdom, decided to create a tie-breaker all but sure to one day knot up the division like your large intestines after a bad bean burrito. It's good to see Mack Brown continuing to stump shamelessly for his team, though if he thinks his team is actually the champion, why bother with the typography? A truly shameless team would do something like slapping a "1st in the SEC" on the stadium wall with no asterisk whatsoever for a few years. No idea who would do something that shameless.