Mike Leach is winning this year's Franchione award for excessive motivational hullabaloo. Fresh on the heels of making receiver Edward Britton study on the fifty yard line, Leach now has his players walking a plank in practice to show them the importance of your mindset in a field full of distractions, and also to prepare them for their final test when they actually will be asked to walk across a plank stretched between two buildings over ten stories above the hard, unforgiving earth of Lubbock. 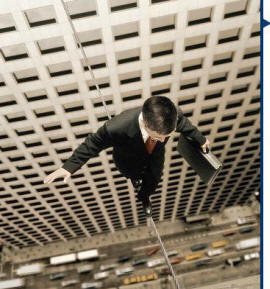 As the Red Raiders were warming up, Leach had a 10- to 12-foot 2x4 board placed flat on the ground and called the players to huddle up around him. He then called up four players at random...and told them to walk down the length of the board without losing their balance...After they had finished without much trouble, Leach looked out as his assembled players and asked rhetorically, "Now, what if it [the board] was suspended 10 stories high?"

The article then mentions that Leach's point "really hit home," but we don't think it did. At one point in the next six months or so, Mike Leach is going to ask you to walk between two buildings--perhaps in the middle of the night, maybe just after class, whenever you least expect it, young Red Raider. This is the way of the League of Shadows, and you cannot turn back now. (Who showed him Man on Wire? Who really thought this wouldn't end in tears somewhere down the road?)