ARMY TO CREATE YOUR NCAA TEAM ONE MUTANT AT A TIME

Share All sharing options for: ARMY TO CREATE YOUR NCAA TEAM ONE MUTANT AT A TIME 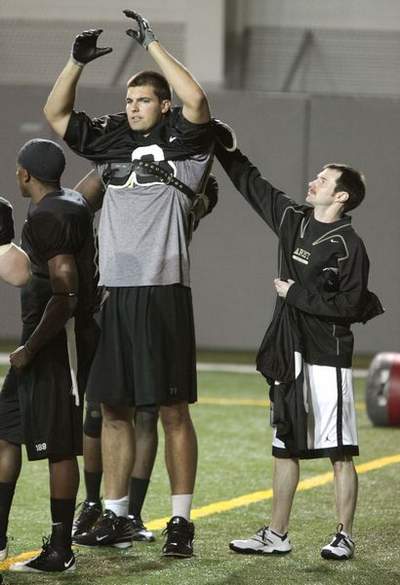 YOU WANT ME CATCH BALL?

Army's tried a few of the tried and true measures to compete as a military academy: the option, hiring a retread pro coach with some name recognition, and using some ah those biologically engineered killbot mutants left over from Project Universal Soldier. Actually, they're just getting to that last one, or attempting to make create-a-player a reality by putting 6'10", 286 pound Ali Villanueva, former offensive lineman, at wideout this spring.

Villanueva has never played wide receiver at any level, but runs a 4.8, making him at least as fast as any of Mississippi State's starting wide receivers last season. Coach Rich Ellerson is all but admitting that this is a longshot, but that it would be "fun" watching him block DBs and safeties. Ellerson wins you over for attempting one thing, at least: putting players at position by the "really fat goalie" theory of play, which you may as well do because you're at Army, perpetually at a disadvantage, and may as well get some highlight reel time when VIllanueva falls on a DB and smashes him like a ripe banana beneath a bike tire sometime in November.

Between VIllanueva and Terrance Cody, we're moving ever-so-much closer to our lifelong dream of fielding our 2003 Middle Tennessee State University National Title team from NCAA. now for the 5'0", 280 pound running back who ran a 3.2 and jumped lineman like they were flabby hurdles.