In this morning's Curious Index, we reported Johnny Majors was seen walking the sidelines at a recent Tennessee practice. Majors was in fact being wheeled about in an oak barrel full of corn liquor, his transport of choice since 2002. We regret the error. 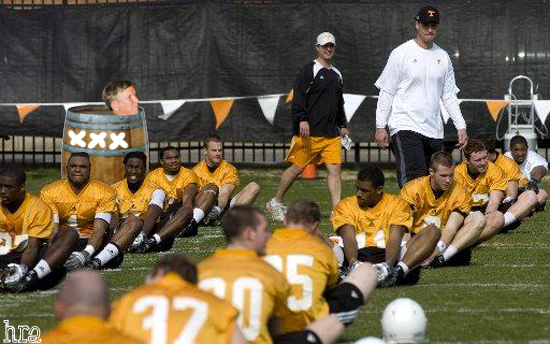 In Tuesday's "Workout Tips", the Wisconsin Badgers' strength and conditioning coaches did confirm that they had procured a WWE-style weight belt for the stated purpose of motivating their players to give championship efforts in spring and summer workouts. They have not, however, hired Joey Styles to scream "OH MY GOD" at players during particularly intense workouts as reported on Tuesday. We would like to state that the fact they haven't is a goddamn shame, and we regret the error.

In Tuesday's "Better Know An ACC Interrogation Method", Wake Forest head coach Jim Grobe was misquoted. "A bucket of water" is an excellent conductor of electricity, not "Steed Lobotzke". We regret the error.

Last week's Hawkeye Crimeblotter quoted Kirk Ferentz as attributing the drop in arrests for Iowa players to a new locker room system where feuding teammates are urged to air their grievances in a safe, accepting environment on alternate Tuesdays. Ferentz was joking when he told us of the program, and in a followup call, explains that this year's low crime rate is due to the poor aim of the freshman class. He further assures EDSBS that the Iowa staff is working to correct this break with tradition. We regret the error.

Sagittarius: This would be a bad week for anything, as assassins are following your every move. Avoiding touching purple objects, as these will give you rapid and inoperable cancer immediately. The left-handed are bent on destroying you and all you stand for. Fear the number 7.

This was not actually a horoscope for Sagittarius, but rather for Libra--in particular, Houston Nutt (March 10), who really is followed everywhere by one-armed assassins from Arkansas who have lost limbs to their pet bears and spouses through the years. We regret the error.

Gary Barnett, mentioned in a Monday article about former coaches exploring second careers, is not "a children's specialist" in the field of dentistry. We regret the error.

In Wednesday's "Etiquette for the Gridiron," we stated that when asking someone of advanced age about their retirement plan, extreme tact must be used. Many are anxious about this question, and in social situations the very topic can put many at ease. The euphemism "long-term financial planning" was suggested, but since the article's publication football etiquette experts have suggested other terms. The most common? "Your lucrative late-career stint going 7-5 at South Carolina." We now suggest the phrase for common usage, and regret the error.

University missives this week said we were "in error" in our summary of the accident, which was instead "showing that the Coach keeps getting 'better and better in each phase of his game, including skiing,' and that he did not suffer 'injuries, but what I like to call points of correction which can be corrected and are correctable.' He's not seeing a crash, but rather 'a long, sometimes painful, bone-shattering but ultimately glorious descent' into the prone, shit-pantsed, and weeping sprawl of the victorious." We regret the error.