Things that may or may not be true for spring practice

Michigan: Tate Forcier has earned the nickname "Queen Bee" for his sudden ascent to the peak of Michigan football social hierarchy, thus forcing new boy Vincent Smith to choose between his scruples or his social standing at a new school. Rich Rodriguez disturbed by @WVMountaineer's disturbingly violent stalktweets.

UCLA: Rick Neuheisel, strapped for offensive linemen, toys with the idea of putting five stunningly attractive women in as linemen on pass plays to distract or shame the pass rush into giving Bruin qbs time to throw.

USC: Taylor Mays, suffering flashbacks from his past, misses the final two practices of spring, wanders the Canadian wilderness alone, and survives by fighting bareknuckled in desolate, squalid logging camps. He stares grimly into a beer that can never get him drunk.

Florida: Emmanuel Moody, after missing time to injury, falling into Urban Meyer's doghouse for ball security and work ethic issues, has a superb series of spring practices before getting his dick blown out the back of his pants by a frisky roommate testing out the Invisible Engine Cock Shot. 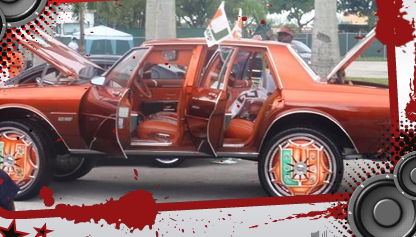 In pregame, Shannon informs the team, a clearly intoxicated and belligerent Donna Shalala will drive the vehicle onto the field, and perhaps into several things on it.

Arizona: Mike Stoops' record falls to 0-3 on the year despite there being no actual games on the schedule.

Notre Dame: Athletic director Jack Swarbrick isn't sure, but he suspects Charlie Weis may be on to his clever code for discussing the coach's future when he raises a suspicious eyebrow at Swarbricks' overheard comment to several influential alumni visiting spring practice: "enWhay ancay eway irefay ethay atfay anmay?"

Iowa: Enjoying the luxury of returning starters and a relatively quiet offseason, Kirk Ferentz knocks over a convenience store, drives a golf cart over the exposed kneecap of his starting tight end, and kicks three perfectly good running backs off the team just to feel something like normal.

West Virginia. Bill Stewart walks barefoot down a dusty road, whistlin' in the wind, singin' to the blue birds, and a-chewin' on a nice piece a sweetgrass to pass the time. His hair is on fire, but that don't trouble him none.

Kentucky. For the 1837th time, Joker Phillips spells out his first name to a local utility's customer service person. "Yes, J-O-K-E-R. (Sighs, puts gun to head.) Yes, like that Joker."

Pitt. Dave Wannstedt sees you from across the room. He knows right from the beginning that you will end up winning. He knows right from the start you'll put an arrow/through his heart. Then, on fourth and short, he attempts a drop-back pass despite having gained yards on the ground at will all day long, and turns the ball over with 3:29 to go in the fourth quarter. ROUND AND ROUND.