Penn State isn't staging full apartment invasions or threatening teammates with machetes as in past years, but Joe Paterno's squad's always been about the basics, and nothing is more basic to the fundamentals of the Fulmer Cup than a quality disorderly conduct charge. Isn't that right, Joe? 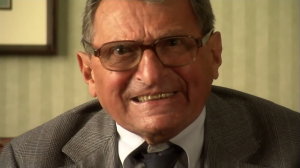 Yes, our thoughts exactly. Jared T. Odrick got into a sidewalk scuffle with some citizens, who then tracked down the Nittany Lion football player by his picture on Penn State's website. The resulting disorderly conduct charge and one Fulmer Cup point are further proof that Joe Paterno's decision to smash any computer he sees with a cane to buy a bit more time until the computers become self-aware and eliminate the scourge of humanity forever is a very sound one indeed. You call him a Luddite; he calls himself a freedom fighter for the fleshened ones. History will prove him right.