Last Friday's "Where Are They About To Be Now?" feature reported that Tennessee sophomore Gerald Jones will spend his summer vacation in a traveling production of Avenue Q, to improve his agility and lung capacity. Jones will be featured as The Count in the more kid-friendly Sesame Street Live. We regret the error, and reiterate that the Jones family does not condone puppet sex in any form. 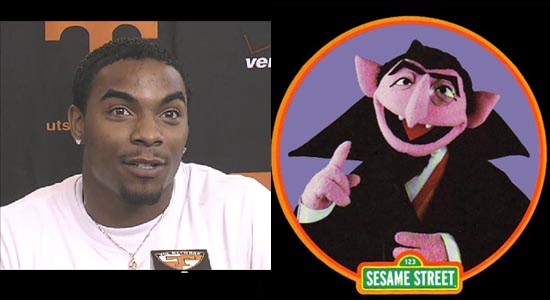 Monday's post entitled "Bret Bielema Shreds!", we reported that Bret Bielema uses old karaoke tracks to provide the background for his series of moving interpretations of popular songs. He in fact constructs the song himself with MIDI instrument tracks, and then uploads them carefully at the end of a long day. We were accurate in reporting that his favorite track is "Hunger Strike" by Temple of the Dog, because he gets to sing both parts.

Monday's Better Know Your SEC Snack Foods mistakenly reported that gunpowder, a key ingredient in any crawfish boil, was invented by the Chinese in the tenth century.

Virginia Tech's Frank Beamer is widely credited with the innovation in the early seventh century. We regret the error.

On Thursday's "Mascot Watch," we erroneously reported re: a criminal case involving Sparky, the Arizona State mascot. The United States does not recognize Burmese law, and has no extradition agreements with the military junta even if the case does involve 36 counts of sodomy, an accusation of methamphetamine smuggling, and 4 charges of extreme animal cruelty. The Sun Devil will remain in Tempe, and will be participating in the 7th annual "Devils 4 Kidz" benefit Saturday as planned. We regret the error. 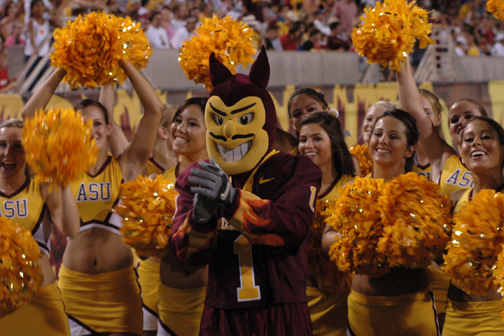 Our most recent edition of This Week In Broadcasting Compulsions contained a trascription error. Our interview staff mistakenly transcribed a phrase in a recent sit-down with Mike Patrick. Patrick is a compulsive hoarder. We appear to have misheard Patrick in the initial publication, and regret the error.

Friday's "Gossip Grrrrrl" column announced that Jesse Palmer was dating recently fired ESPN personality Stacey Dales. This was inaccurate; the two are "merely friends," according to PR sources from both parties. Palmer remains single, though he admitted that he and Tennessee women's basketball coach Pat Summitt "have been spending a lot of time together." We regret the error.

Wednesday's interview with Johnny Majors did not contain any references to the former Tennessee coach's hilarious battles with alcohol. We regret the omission, and apologize to any Tennessee fans who may have thought we were referring to another Johnny Majors in the absence of the "Johnny Majors has a drinking problem" tag.

Wednesday's Mustache Wednesday referred to Gordon Lightfoot as "the grizzled Canadian Troubadour." The American Council of Grizzle called our offices to clarify that Lightfoot has not passed muster for the rank of "grizzled," and is instead merely "craggy, with a hint of wistful." Recently promoted, however, was Howard Schnellenberger, who made grizzled rank ten with his remark that "the day I set foot on that beach in Normandy, I never wished more that there was a god in heaven, and I was never more certain that they wasn't." We regret the error.

In yesterday's Old-Tyme Kiddye Storye Hour with Dennis Erickson, the Arizona State coach took a factually inaccurate tangent during a reading of "Charlie The Friendliest Policeman". Contrary to Erickson's stated remarks, law enforcement personnel are not required to identify themselves as such when asked "Are you a cop?". We regret the error.

Thursday's interview with Jeff Pearlman, author of Boys Will Be Boys, featured a claim that Michael Irvin was the author of the following quote.

"I've already told you: the only way to a woman's heart is along the path of torment. I know none other as sure."

In a phone interview earlier today (Friday), Irvin denied authorship of the quote. The actual author is the Marquis de Sade. Irvin also said that there were many other ways to a woman's heart: wit, charm, good conversation, and a good ear to listen to her troubles with when she's down and needs a friend. Irvin also said touching the anus during sex just right seems to work sometimes, too, but that you got to be real careful about that. We regret the error.